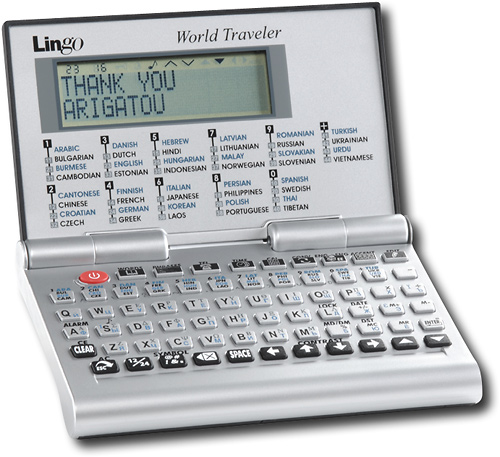 Do you ever try to spark conversation in a different language, only to find yourself making a fool of yourself because you were stumped on a particular word or phrase? Meanwhile, the people you were trying to impress took pity on you with gracious smiles and nods but with puzzled looks in their eyes. Then you just had to apologize and leave. With the 44 Language Translator, you could quickly get yourself out of those awkward situations by punching in what you want to say, selecting one of the 44 languages, and whammo! you get to be the international hero you’ve always envisioned yourself to be.

If you’re a frequent traveler, basic words and phrases you need to get by are loaded into this pocket-sized gadget. (But keep it close because pickpocketers will want to gank it, and then you won’t be able to explain the mess to Interpol.) There’s no need to buy a bunch of translators or lug around translation books, fumbling through them like an obvious tourist. Just slip the compact 44 Language Translator into your backpack and feel confident that you have the tools to communicate, no matter where you are. 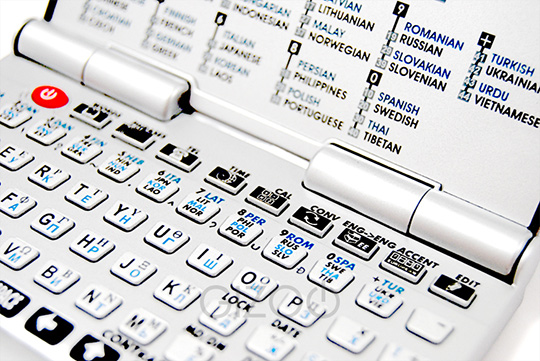 Love to shop in different countries? This slick gadget converts 8 types of currency, metric units, clothing and shoe sizes. It also has a calculator, as well as a world time clock for 200 cities and an alarm function. It comes with 2 AAA batteries and a CR2032 Lithium battery, so it’s ready to go right out of the box. The screen displays 2 lines in up to 16 quite large, legible dot matrix characters, and the key pad appears to be more fingertip-friendly than most popular smartphones. 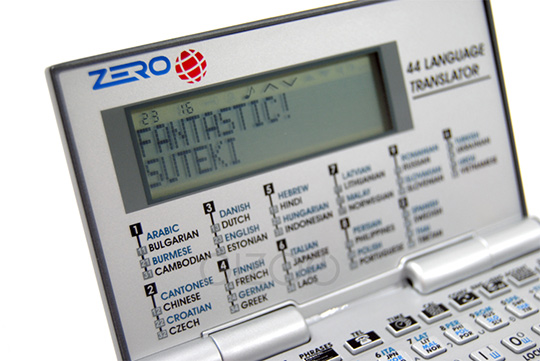 Wouldn’t it be amazing to speak a dozen different languages? You can, with the Live Conversation Speaking Translator. Unlike other translators that just convert text, this one can translate live conversations. You simply speak into the microphone on one side, and it automatically translates it […]

This neat travel partner is small enough to fit in your pocket and will help you communicate quickly in twelve different languages.

The Firefly: The Gorramn Shiniest Language Guide and Dictionary in the ‘Verse Hardcover Book will teach you how to talk just like they do in the show. You will soon be able to insult your enemies in magnificent style, even learn declarations of love. This […]

The Verbarius Digitless Clock is as unusual and wordy as clocks can get. You’d normally expect to see some digits on most clocks, but not on this one. Instead, the time is served up to you with the numbers (and the time, essentially) all spelled out. […]