While wooden baby blocks in English used to be the standard baby toy, today’s babies need to get with the game and pick up a foreign language or two to compete in this dog-eat-dog world. Geeky babies will get a head start in training for their future survival when they play with Foreign Language Baby Blocks.

Sure, it may seem excessive and cruel to complicate a baby’s world with foreign blocks. But it’s much easier to learn foreign languages earlier rather than later. It’s going to pay off in the long-run. 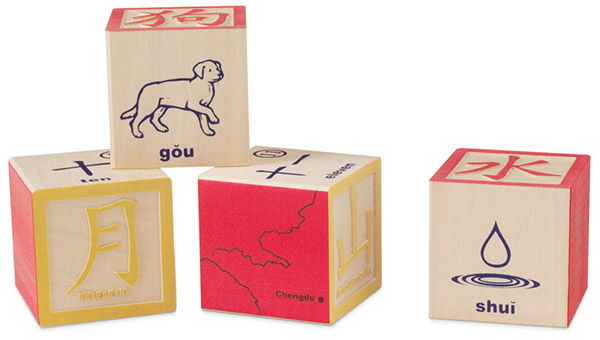 In today’s world, it’s not enough to know one language. Help your children become global citizens with these high-quality, handcrafted wood blocks. Made in Michigan from kiln-dried basswood, colored with nontoxic, child-safe inks, blocks have embossed sides and beveled edges. Each set includes 24-32 blocks (alphabets, numerals, and animal pictures), each 1 3/4″. 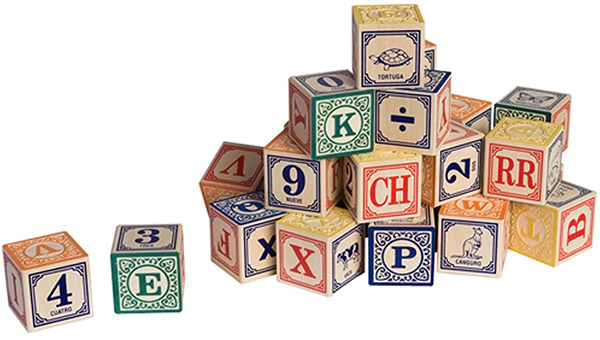 When baby is not learning letters and numbers, they can hone their engineering skills by stacking the blocks in sturdy configurations. Some babies might enjoy demolishing their block towers, but at least your money won’t be completely wasted. Just like Lego blocks, wooden blocks are timeless and are fun to play with at any age and any IQ.

Foreign Language Baby Blocks come in 13 different languages and English is not among them. One set of blocks are $39.95 at SkyMall.com.

Meanwhile, there are some other fun geeky items for your bundle of joy. You can still teach your baby the English alphabet with the My Little Geek ABC Book. Then, when your baby is ready to learn a little programming, there’s the CSS for Babies Book. For baby’s downtime, you can rock him to bed with the touching Darth Vader and Son Book. And be sure to have plenty of onesies on hand, like this Math Geek Baby Onesie.

Legos and other building blocks are great, but it sure does hurt when you step on them. There’s no other pain quite like it. Well, that problem has been solved thanks to these Soft Blocks Foam Floating Brick Blocks. Step on them all you want. […]

When a youngling is just starting to learn the alphabet, it’s an opportune time to teach them about important nouns that start with each letter. The Star Wars Cross Stitch Alphabet Pattern is a unique way to teach your child about letters and the key characters […]

Kids love blocks, and if you are using blocks to teach your kids the ABCs, why not geek it up and teach them a whole lot more with these XYZ Alphabet Blocks? You will have a little geek in training. Teach them things like D […]

If you ever wished for teeny tiny Lego blocks, NanoBlock Micro Building Blocks are a dream come true. Each set of NanoBlocks comes with hundreds of pieces, but since they are so small, the finished design is only a few inches tall. Their micro size […]

The first flowcharts I ever drew up were for my computer programming class. I probably made some basic ones in my earlier classes, but I probably didn’t take them seriously enough to actually remember them. If you want to prepare your child for his or […]

The Firefly: The Gorramn Shiniest Language Guide and Dictionary in the ‘Verse Hardcover Book will teach you how to talk just like they do in the show. You will soon be able to insult your enemies in magnificent style, even learn declarations of love. This […]

Guardians of the Galaxy Baby Groot Wooden Cutting Board

This Guardians of the Galaxy Baby Groot Wooden Cutting Board is an adorable wooden cutting board that looks like baby Groot. It measures 15″ x 11 1/4″ and will geek up your kitchen while you are preparing meals. You can say “I am Groot”. over […]

Do you know what day it is? It’s tough keeping 365 days of the year straight all the time. Correction, this leap year has 366 days to make matters worse. I have to glance at the calendar at least ten times a day to figure out what today […]