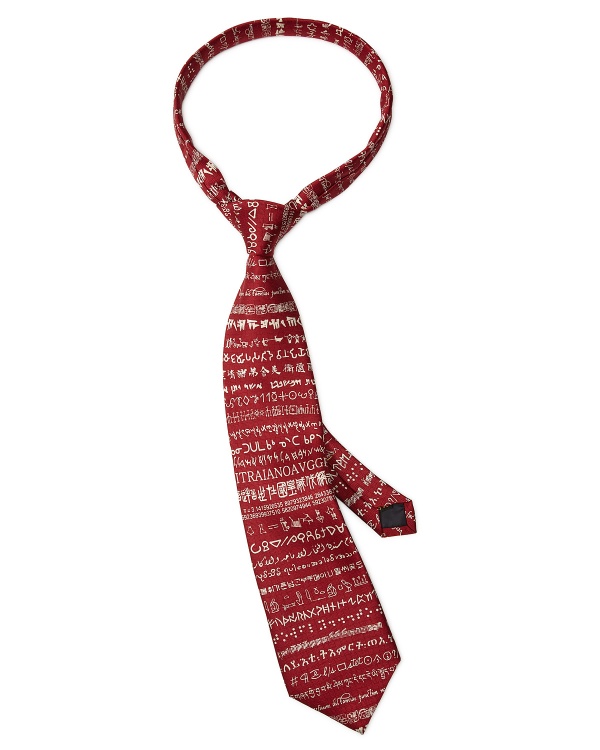 I’ve always had a fascination with languages. It’s something that people use to talk to one another and get their messages across; but at the same time, it’s something that humans have made up themselves as well. Not all languages were probably easy to speak, understand, or pass on, because some eventually stopped being used and died out. But they’re not really dead, because they live on with this Dead Languages Tie.

The Dead Languages Tie is a funky maroon tie with a several dead languages printed all over it. It adds a hint of mystery (aside from the usual dose of geekiness) to your overall look. Don the Piano Tie if you want to play some simple tunes on the tie itself or go for the Circuit Board Tie to push the geeky (but adorable) look even further.

The dead languages tie will spark the interest of any art and history lover. Based on the steps leading up to the Los Angeles Library, this tie is a torso-length take on Jud Fine’s sculpture, “Spine,” which displays ancient languages, hieroglyphics, math, music, braille and all symbols of beauty and historical significance.

The Dead Languages Tie is available from Uncommon Goods for $45.

We recently got a chance to test out id America’s Spark Aluminum In-ear Headphones. I’ve been using them for a little over a week and I will now let you know my thoughts on these unusual In-Ear headphones. You might know id America for their […]

“How To Tie A Tie” Necktie

I don’t have to wear a tie very often so I always forget how to tie a tie when I need one. If you are like me, this “How To Tie A Tie” Necktie will come in very handy. It tells you exactly how to […]

Wouldn’t it be amazing to speak a dozen different languages? You can, with the Live Conversation Speaking Translator. Unlike other translators that just convert text, this one can translate live conversations. You simply speak into the microphone on one side, and it automatically translates it […]

You won’t be able to hang an entire keyboard or Grand Piano around your neck (without breaking it and other parts of your body in the process), but what you’ll be able to do is tie more than just an image of it around your […]

I think scooters are a fun and relatively safer way for your kids to travel short distances (as opposed to skateboards. But that’s just in my opinion.) However, I know some kids who prefer boards because of the “cool” factor. Well, the Razor Spark Emitting […]