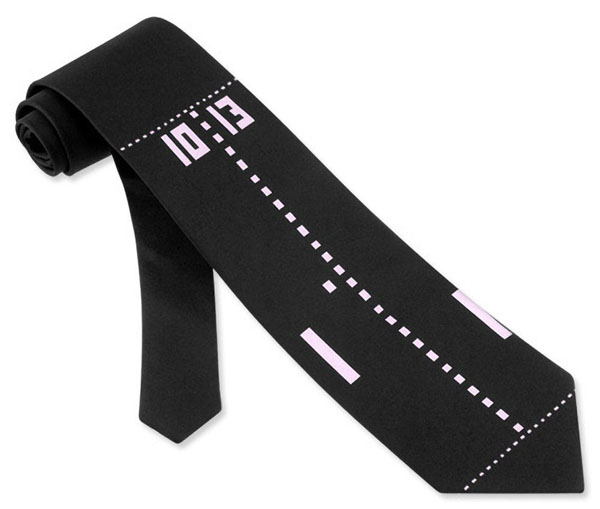 I haven’t met a guy who hasn’t tried playing Pong at least once in his life. But if you have, then it’s time to educate him on the place that Pong has in video game history. Let him wear this Men’s Pong Tie around his neck as a brief, but accurate tutorial.

Just looking at the microfiber tie makes me want to have another go at the vintage game. But anyway, if plain old black and white isn’t your thing (or if you really don’t have a clue what Pong is), then you might want to check out the Men’s Guitar Tie or 8-Bit Tie instead.

With neckwear, much like most things in life, to wear one successfully all you need to do is stick to the classics. And dear reader, if I may ask you, what could possibly be more classic than, well, PONG. Yes, yes, the arcade game classic. No one can deny the distinct and impressive mark it has made on the world. Or the stylish simplicity of its graphics. To deny PONG it’s right as a clear-cut classic would be as absurd as denying Casablanca. Or Super Mario Brothers. It just isn’t going to happen. Not in the world of neckties at least.

This cool DIY clock kit from Adafruit Industries comes with an animated Pong inspired display by default, but it can easily be hacked into just about anything you want. You’ll need some basic soldering & hand tools that are necessary to assemble it. The good […]

This Atari Pong Lines Woven Tapestry Throw Blanket will bring back fond memories of playing Pong from all of those years ago. Those were the days before 3d and virtual reality, but we still loved the games, simple as they were. If you played your […]