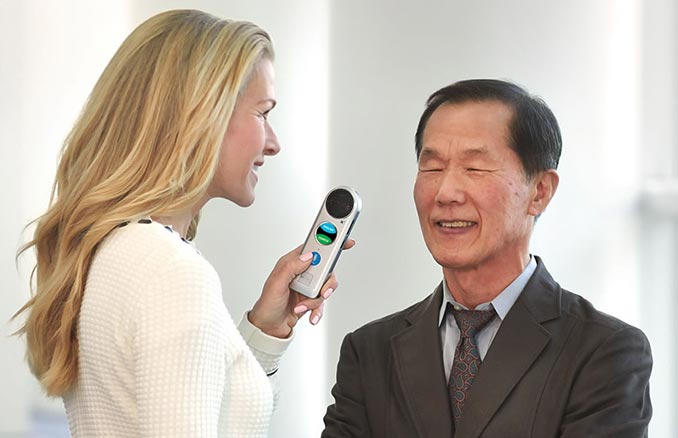 Wouldn’t it be amazing to speak a dozen different languages? You can, with the Live Conversation Speaking Translator. Unlike other translators that just convert text, this one can translate live conversations. You simply speak into the microphone on one side, and it automatically translates it and “speaks” it to the other person. They talk into the mic on the other side, to have it translate their words back to you. This ability to easily conduct dialog in many languages would be incredibly useful for International travelers and business people.

It can do voice translation without Internet access for 12 languages including Spanish, Chinese, French, Japanese, German, Italian, Korean, and Russian. With an Internet connection, it can verbally translate 21 more languages including Polish, Hungarian, Hindi, and Greek. On top of this, it can do text translations for 19 additional languages.

This is the language translator that provides two-way verbal communication between people that don’t share a common language. Each side of the device has an integrated microphone that captures dialogue, automatically translates the message, and “speaks” it to the other person. Unlike text translators that require one to stop and enter each sentence word for word, one simply talks into this device as if engaging in real conversation.

It verbally translates 12 languages without requiring Internet access including Chinese, French, German, Italian, Japanese, Korean, Russian, and Spanish. When connected to the Internet, it verbally translates 21 additional languages including Greek, Hindi, Hungarian, and Polish, and provides text translations for an additional 19 languages. Charges via AC with included USB cable.

Order the Live Conversation Speaking Translator for $349.95 at Hammacher Schlemmer. It’s expensive, but it could be an indispensable tool.

Are you so colorful that you could make a box of crayons jealous? If so, the Crayola Mini Nail Polish Set is the box you’ll need when you just can’t decide on one color.

This neat travel partner is small enough to fit in your pocket and will help you communicate quickly in twelve different languages.

It’s every girl’s dilemma… what color nail polish should I wear? When you wear Happy Birthday Nail Polish by Deborah Lippmann, you don’t have to decide on one color because you can wear every color of the rainbow and then some. Your nails will never look more festive […]

Have you ever been to a party that was on the dull side, where one of the guests or hosts decides to pipe up with a corny (and sometimes over-used) joke to try to break the ice? A few feeble laughs are usually generated but […]

The Verbarius Digitless Clock is as unusual and wordy as clocks can get. You’d normally expect to see some digits on most clocks, but not on this one. Instead, the time is served up to you with the numbers (and the time, essentially) all spelled out. […]