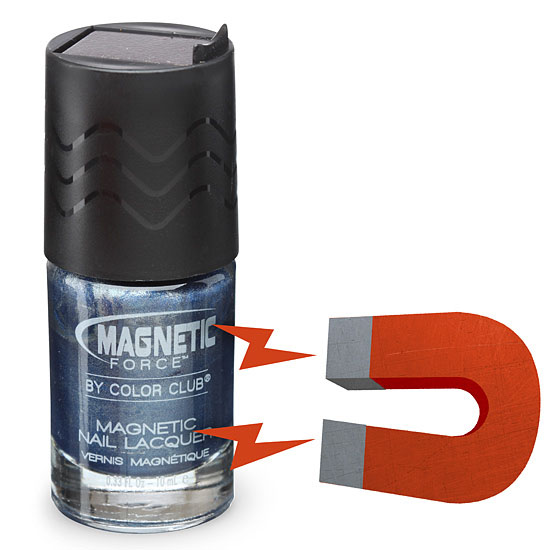 I’ve seen nails with sparkles, glitter, crackles, stripes and intricate designs, but I’ve never seen nails that have been designed by the strength of magnetic force. Magnetic Force Nail Polish lets magnets do all the work to create unique but extremely attractive nail art.

Geeks don’t want animal-print nails. But maybe we’d go for nails designed by the powers of physics. The iron fillings in the magnetic polish will move when directly exposed to the magnetic cap, forming beautiful ripples similar to those in a stone. Choose from several colors of lacquer, such as the burgundy shade called “HipNotic” or the “ElectroMidnight” blue shade. Whichever color you choose, your nails will look like they were designed in a salon.

Magnetic Force Nail Polish
Make waves with Color Club’s Magnetic Force. Just apply Magnetic Force lacquer to nail. While polish is still wet, hover the magnetic brush cap over nail for 15 seconds. Be careful not to touch the polish! When you remove the cap, a unique design will appear!

Get Magnetic Force Nail Polish at Amazon or at ThinkGeek.

You may also want to peruse the beautiful nail polish shades from The Hunger Games Capitol Colors Nail Polish Collection by China Glaze.

Are you so colorful that you could make a box of crayons jealous? If so, the Crayola Mini Nail Polish Set is the box you’ll need when you just can’t decide on one color.

It’s every girl’s dilemma… what color nail polish should I wear? When you wear Happy Birthday Nail Polish by Deborah Lippmann, you don’t have to decide on one color because you can wear every color of the rainbow and then some. Your nails will never look more festive […]

We understand that not everyone can carry around Giant Swiss Army Knives with them at all times. Alternatively, there are simpler all-in-one’s that’ll help McGyver your way through some of life’s technical difficulties. There’s the Kelvin 23 Super Tool for times when you don’t want to […]