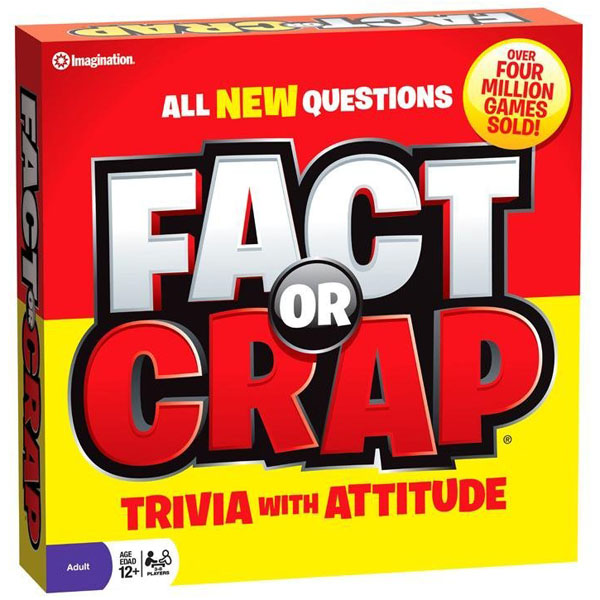 I went to school with this huge know-it-all who felt like it was his right or duty to spew out random factoids in the middle of class (which annoyed the teacher) and in the middle of conversations that he wasn’t really a part of (which annoyed everyone else.) It would be weeks, months, or years later before I would remember something he said and I’d realize that it was all, well, crap. If you know any annoying know-it-alls, then I suggest you challenge him or her to a round of the Fact or Crap Game.

That way, when they get something wrong, you can just yell out that they’re full of crap and totally get away with it; since it’s along the lines of the theme of the game and all. The Fact or Crap Game is a fast-paced trivia game that comes with a whole lot of questions–with a whole lot of crap.

Try the Imaginiff Game or the Worst Case Scenario Board Game if you’re up for something different. 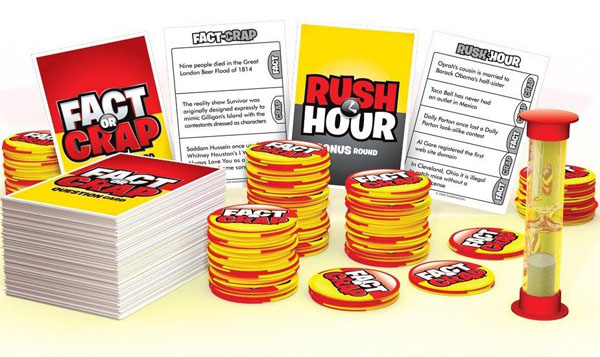 Here’s a fast-paced trivia game that tests your knowledge of the everyday and truly bizarre. But in the final analysis, there’s only one question that really counts: is it fact or is it crap? The Fact or Crap Game comes with 140 cards, 200 tokens, a sand timer, and a player guide.

The Fact or Crap Game will be available from Entertainment Earth in January 2012 for $17.99 and is available at Amazon for $17.99 right now.

Sometimes, it’s all in your mind. If you think that you’re going have a crappy year in 2012, then chances are, you’re going to be able to subconsciously make that happen. So if you’ve already got such a (there’s no other word for it) crappy […]

Holy Crap You Guys It’s a Rock From The Moon!

Holy Crap You Guys It’s a Rock From The Moon! No, it really is. This is the real deal. It is a certified authentic 2mg piece of moon rock. This moon rock is from lunar meteorite NWA 3163. If you have ever wanted to own […]

Every parent can probably remember a time when they tried to pry their little darling angels from the clutches of some favorite game or show, only to be made to feel like the bad guy just for doing the parenting thing. The Digital Innovations Universal […]

Get ready to spend some time with a brain, an athlete, a basket case, a princess, and a criminal when you wear The Breakfast Club We’re All Pretty Bizarre Locker Ringer Girls T-Shirt. You don’t have to be in detention to enjoy this 60% cotton/40% […]

One of my favorite moves of all time is The Italian Job. There’s just something about the whole team coming together and working hand in hand to get the job done. My favorite character was the safe cracker. I just think the role is extra […]