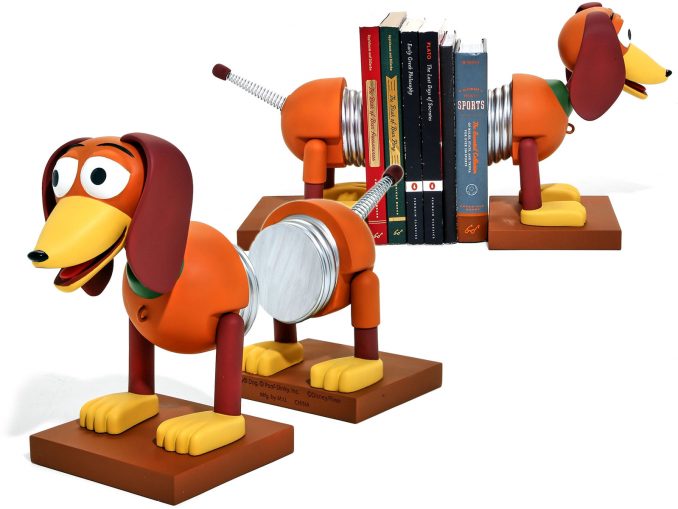 Toy Story 4 will be out in just a week, and many of the same characters will be back again including Slinky Dog. (This time he’s voiced by Blake Clark, the same as in Toy Story 3, as Jim Varney passed away after Toy Story 2.) If you like the character, there’s no better merchandise than these Toy Story Slinky Dog Bookends.

Officially licensed by Disney Pixar and made of polyresin, these Slinky Dog Bookends are extremely cute and an accurate representation of the character from the movie. The front end is approximately 8.75″ tall with a 4.75″ x 4.75″ base, while the back end is about 6″ tall with the same size base.

Slinky Dog’s back end might’ve been goin’ to Baton Rouge in Disney•Pixar’s Toy Story, but this time, it’s busy keeping your books in place!

Available exclusively from BoxLunch, these Toy Story Slinky Dog Bookends are $39.92. (Sale price at the time of publication and subject to change.)

If you’ve got a million bucks to throw around and want to go for a change in profession, then here’s something you might want to look at: the Veniamin Human Slinky Costume. It’s crazy how a costume that makes you look like a slinky could […]

The guys over at ThinkGeek have been churning out great products since the beginning of time, and it’s about time they created a product that rewarded their mascot.  Timmy The Monkey is the adorable face that greets you when you jump onto their website, and […]

Everyone thinks they have a smart dog, well now let them show it with the DNA Dog Toy.  Playing with dog bones is not for your high IQ dog; he runs around with his own DNA chewable toy.  This 4 inch rubber chew toy is […]

With the Final Season fast approaching, you’ll need somewhere to keep 8 seasons worth of Game of Thrones DVD or Blu-ray discs. Unless you already have the Dragon Egg Bookends or Direwolf Bookends, you need these Game of Thrones Dragonstone Gate Bookends. Officially licensed by […]