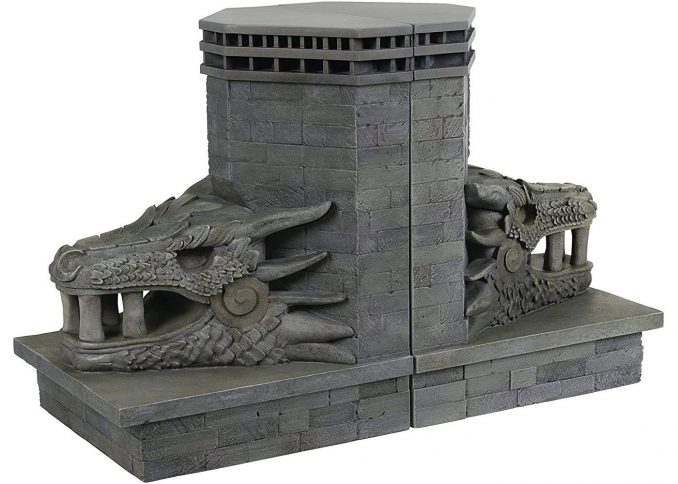 With the Final Season fast approaching, you’ll need somewhere to keep 8 seasons worth of Game of Thrones DVD or Blu-ray discs. Unless you already have the Dragon Egg Bookends or Direwolf Bookends, you need these Game of Thrones Dragonstone Gate Bookends.

Officially licensed by HBO and designed by Dark Horse Comics, this set of Dragonstone Gate Bookends are constructed of polyresin and then meticulously hand-painted for excellent detail. They measure about 7.5″ tall and 6″ wide. 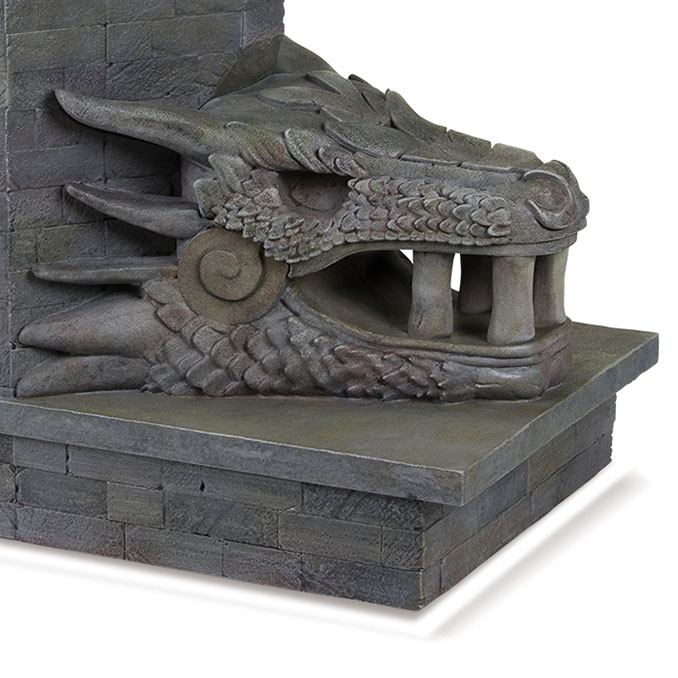 When Daenerys Targaryen returns to her birthplace of Dragonstone, she enters the castle doors through the massive and ominous Dragon Gates, to claim her rightful throne. The Dragon heads warn all others of the power of the Targaryen family. These 7.5” tall bookends are sculpted and hand-painted to perfectly match the details of the set pieces from HBO’s Game of Thrones.

These bookends are based on the awe-inspiring Dragon Gates, which guard the castle of Dragonstone, the birthplace of Daenerys Targaryen. Sculpted and hand-painted to perfectly match the set pieces from Game of Thrones, these bookends stand 7.5 inches tall.

Game of Thrones Dragonstone Gate Bookends are $125.95 a set at the HBO Shop. You can also find them at Deep Discount, Entertainment Earth, and Amazon.

Although they aren’t affiliated with Game of Thrones, we’ve seen some really cool Dragon Bookends before.

Protect your valuables like only the Mother of Dragons can with this Game of Thrones Drogon Purse…Yeah, Daenerys didn’t do the best job of protecting Viserion from the Night King, but I guess mothers have to learn to let go at some point. This officially-licensed […]

This is the coolest way to prop up those books and keep them all organized. Game of Thrones Dragon Egg Bookends. Should they hatch some dragons, that’s just a bonus. Decorate like the mother of dragons! These are perfect for your Game of Thrones books. […]

This Game Of Thrones Dragon Egg Mug Set is patterned after the three fossilized dragon eggs Daenerys Targaryen receives as a wedding gift from Magister Illyrio Mopatis. She thought they were the most beautiful things she had ever seen, and you have to admit, this […]