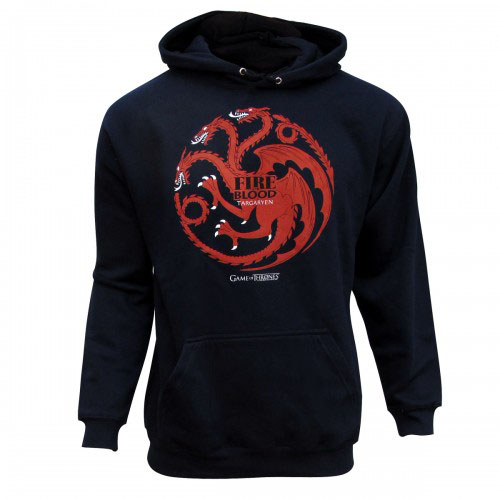 As the Starks say, “Winter is coming” and you’ll want something to keep you warm even if it’s only a chilly summer’s night now. The Officially Licensed Game of Thrones Hoodies are available in House Stark, House Targaryen, House Greyjoy and as the Night’s Watch Oath Hoodie. Each hoodie is pre-shrunk and made from a blend of 80% cotton and 20% polyester.

Whether you want to wake the dragon, say the words or run with a direwolf, these sweatshirts will provide you with something to get your imagination running as we wait for new episodes of the HBO Games of Thrones TV series and the final two books in George R. R. Martin’s A Song of Ice and Fire Saga.

Which house do you swear allegiance to? These Game of Thrones Sigil Rings have you covered if you choose Baratheon, Stark, or Targaryen. These chunky style rings look good on both men or women. They are available in sizes 7 and 10 and feature the […]

In Westeros it can be dangerous to mix up your wine glass with another person’s. Theirs might be poisoned after all. You may not have that problem, but it’s still nice to have your own drink. These Game of Thrones House Sigil Wine Charms will […]

Winter might be behind us but April showers are headed our way and the Game of Thrones House Sigil Umbrella is the best way to stay dry as you make your way to the Iron Throne… or to your office. When it comes to that […]

Things are going to get hot with the Game Of Thrones Targaryen Stein, although you can use it to drink cold things, too. The Targaryen motto is “Fire and Blood,” although it could easily be ‘the higher you rise, the harder you fall’ because the […]

This Game of Thrones: Stark Sigil Direwolf USB Flash Drive looks pretty amazing. It will be a great addition to your collection. Especially if you prefer House Stark to the other houses. It has a 64GB capacity and a strong alloy case with a necklace/keyring […]