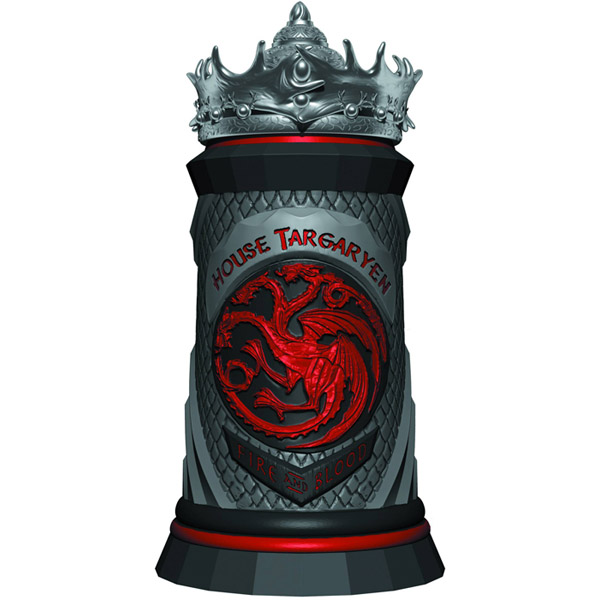 Things are going to get hot with the Game Of Thrones Targaryen Stein, although you can use it to drink cold things, too.

The Targaryen motto is “Fire and Blood,” although it could easily be ‘the higher you rise, the harder you fall’ because the name no longer carries the same weight it used to.

Once upon a time ago, Aegon the Conqueror, the first of the Targaryen kings, had a pointy chair called the Iron Throne forged. People have been killing each other for the honor of sitting on this uncomfortable chair ever since then. The last Targaryen king became known as the Mad King, which didn’t do wonders for the reputation of House Targaryen.

That’s all ancient history, though. Today, the Targaryen name has risen from the ashes like a phoenix… or a dragon, with Daenerys Targaryen (AKA Khaleesi AKA Stormborn AKA Mother of Dragons) determined to sit upon the Iron Throne.

Now you can imagine yourself as mighty Aegon, mad Aerys II, or determined Daenerys with a highly-detailed stein that includes the ‘Fire and Blood’ motto, along with the three-headed dragon sigil of House Targaryen.

The Game Of Thrones Targaryen Stein will be available May 2015 but it can be pre-ordered now for $70.99 at Urban Collector.

The Mother of Dragons is ready to take command of your GoT collection with the Game of Thrones Daenerys Targaryen Sixth-Scale Figure. Based on Emilia Clarke’s portrayal of the character, Daenerys stands 10.2-inches tall and features Khalisee-wortyh accessories like Kraznys’ Whip and a tiny Drogon […]

Now that’s what I call a bust. This Game of Thrones Daenerys Targaryen Bust features the beautiful Daenerys Targaryen with one of her dragons perched on her shoulder. The detail is pretty impressive as it looks just like Emilia Clarke who plays the character on […]

She is Mother of Dragons, Daenerys Stormborn, and Khaleesi; and now she is also the Game of Thrones Daenerys Targaryen Legacy Collection Action Figure. The beautiful Emilia Clarke brings Daenerys to life on the hit HBO series, and her likeness has been captured on this […]

The Game of Thrones Targaryen Bowler Bag is a must for fans of house Targaryen. Carry your things in style and win the Iron Throne. It has double handles with a removable, adjustable shoulder strap. It also has a cool house logo. Game of Thrones […]