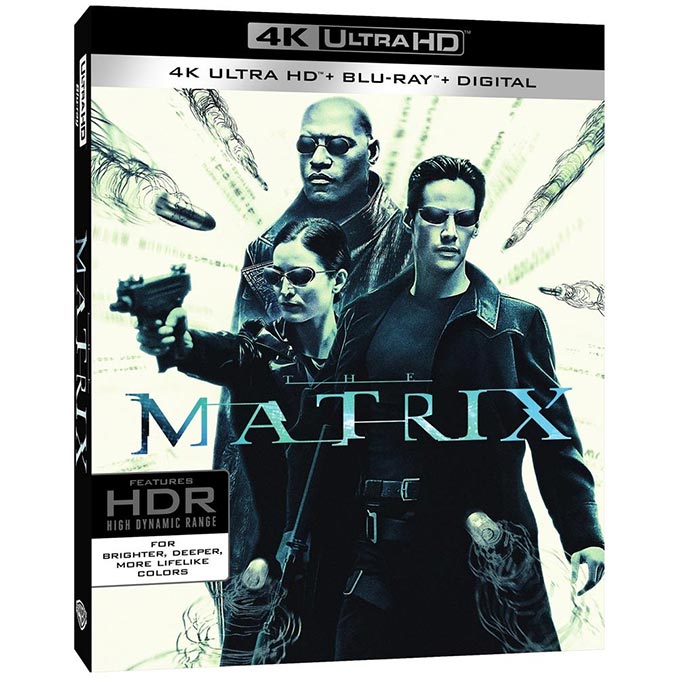 Jurassic Park wasn’t the only high definition release today; The Matrix Was Released on 4K Ultra HD as well. While some 4K releases are low quality because they are basically just upsampled versions of the Blu-ray, The Matrix 4K UHD is the real deal—it is a genuine remaster.

In fact, Bill Pope, the film’s director of photography, supervised The Matrix 4K UHD remaster, which included a new scan of the original camera negative. This remaster includes Dolby Vision HDR, which dramatically expands the color palette and contrast range and uses dynamic metadata to automatically optimize the picture for every screen – frame by frame. Video isn’t the only thing upgraded, as this release also features a Dolby Atmos soundtrack that was remixed specifically for the home theater environment to place and move audio anywhere in the room, including overhead.

In the near future, a computer hacker named Neo discovers that all life on Earth may be nothing more than an elaborate facade created by a malevolent cyber-intelligence, for the purpose of placating us while our life essence is “farmed” to fuel the Matrix’s campaign of domination in the “real” world. He joins like-minded Rebel warriors Morpheus and Trinity in their struggle to overthrow the Matrix.

In addition to the 4K UDH Blu-ray, this package also includes a standard Blu-ray disc that is remastered from the new 4K scan.