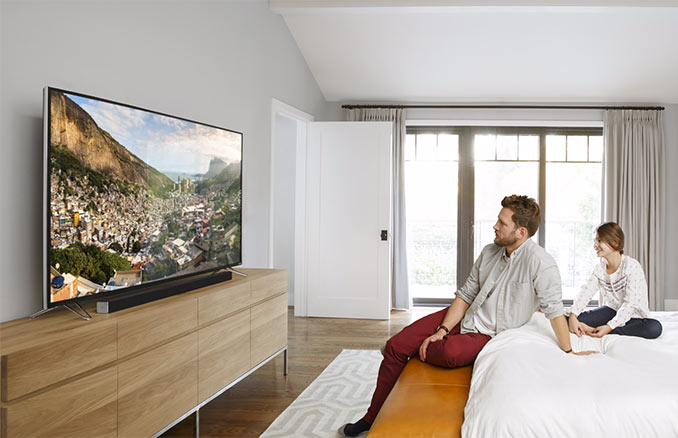 We go hands-on in this VIZIO M50-D1 50″ 4K UltraHD LED Smart TV Review to evaluate the picture quality and features of this HDTV. How does its quality, features, and value stack up? This VIZIO M50-D1 TV was provided free to GeekAlerts in exchange for this review, but all opinions are our own. 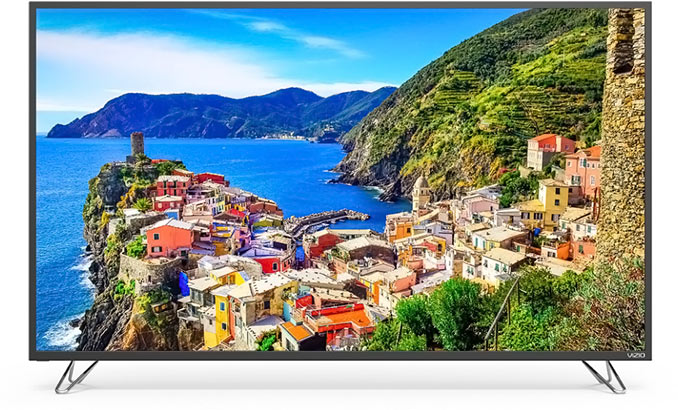 Unboxing the VIZIO M50-D1 presents a relatively standard looking dark gray plastic encased HDTV. However, the relatively thin bezel gives it a sleek look, and the metal trim on the sides is a nice touch.

Setup is easy for anyone into gadgets, and they offer helpful videos for anyone that needs assistance. It is easiest to just follow the prompts on screen and on the remote to get all the basics set up, and you can go back and tweak settings whenever you want.

After quickly setting up, I watched some 4K HDR YouTube videos to gauge the display. It was very impressive with remarkable detail and vibrant colors. The incredible picture quality isn’t too surprising given the stats for this display that include UltraHD resolution, high dynamic range, and full-array LED backlighting with local dimming.

While the jump to UltraHD from HD isn’t nearly as dramatic as the difference between HD and old-fashioned television, it does offer significantly more detail and clarity. Full HD has a resolution of 1920 x 1080 pixels, and is known as 1080p because of the 1,080 lines of resolution. Ultra HD (UHD) has a resolution of 3840 x 2160 pixels, and is therefore sometimes called 2160p.  It is also called 4K because its horizontal resolution is around 4,000 pixels. It has double the horizontal and vertical pixels, for a total of 4 times the resolution of HD, which is why it is sometimes also called Quad HD.

As the image above demonstrates, UHD offers incredible resolution and clarity. This is evident on the VIZIO M50-D1; just play some 4K content to be amazed by the precise clarity and stunning detail.

You might not have 4K as a requirement on an HDTV if you don’t have a 4K Blu-ray player, due to the current lack of content. However, Netflix, Amazon Prime, and YouTube all have some 4K content already, and that is bound to increase significantly over the coming years. In fact, VUDU already offers 50+ hit movies in 4K with Dolby Vision HDR (more on HDR next.) Going 4K in a television now is a good way to future-proof your purchase, in anticipation of the rapid proliferation of 4K. Plus, this VIZIO has a Spatial Scaling Engine that upscales HD content to UHD resolution, so you can take advantage of the Ultra HD display even on non-4K content. While it can’t work wonders with lower resolution sources like DVD, it does phenomenal with 1080p—your Blu-ray movies will look better than ever. 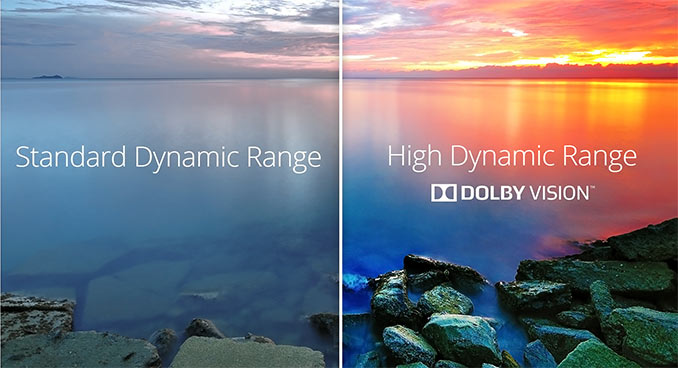 Another cool new feature supported by the VIZIO M50-D1 is High Dynamic Range (HDR). There are actually two different competing HDR formats: HDR10 and Dolby Vision. Fortunately, this TV supports them both.  While UltraHD adds a lot more pixels for great detail, HDR allows each pixel a wider range of colors for a much more vibrant, realistic display.

The above image demonstrates Standard Dynamic Range vs Dolby Vision HDR. If you haven’t seen HDR content before, you’ll be impressed when you watch a 4K HDR video on this TV. You’ll notice all these bright, vibrant colors that you’ve never seen on a television before. However, the real benefit is that this wider color range allows for a more realistic visual representation, and therefore great immersion in your programming. 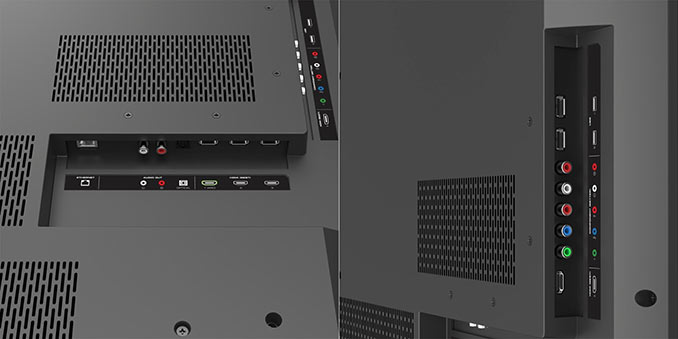 The VIZIO M50-D1 HDTV has 4 HDMI ports, so you have plenty of connections for cable boxes and game consoles.  Port 1 supports HDMI v2.0 for 4K UHD Blu-ray players. It also has a component video input, for compatibility with older devices. It has Analog RCA Audio Out and Digital Optical Out (SPDIF) for hooking up to a soundbar or home theater surround sound system. There are 2 USB ports, and it has an Ethernet port in case you have access to wired Ethernet. Wired Internet isn’t necessary though, as it features fast 802.11ac dual-band Wi-Fi and supports HEVC H.265 and VP9 codec for wireless streaming of 4K UHD content. 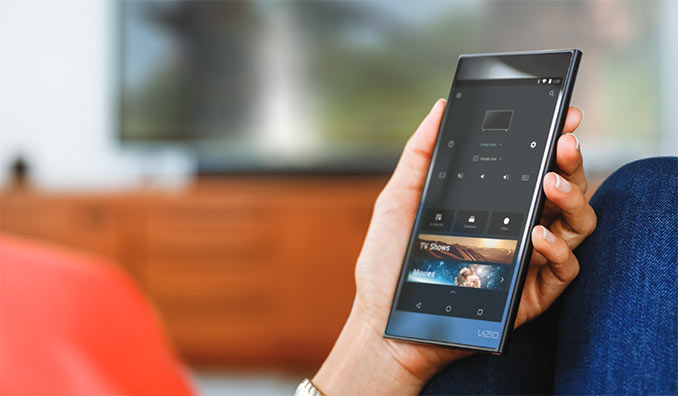 My favorite feature of this television is the Vizio SmartCast Android Tablet Remote Control. It is a 6″ Android tablet with a powerful processor, 1.5GB of DRAM, and 8GB Storage. It makes it easy to control all of the TV’s settings, but is especially convenient for browsing through content on streaming services. It sure is a lot faster and easier than using a big remote with a lot of buttons.

It is a pretty decent Android tablet as well, so you can load it up with games, browse the Internet, read email, etc. It even comes with a wireless charging dock, so you never need to plug it in. Just place it in the magnetic dock when you are done, and then it is always charged and you always know where to find it.

A basic IR remote is also included, so you can easily change the channel, change the volume, and control other basic functions without the tablet remote. 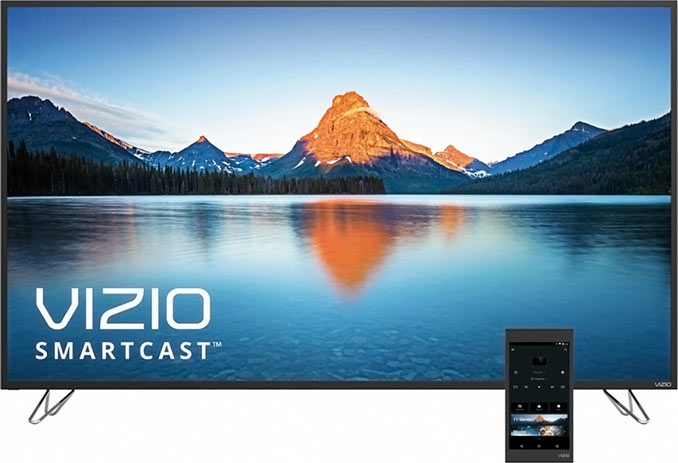 In order to keep the cost down while having many great features, there is something missing from the VIZIO M50-D1. Namely, it doesn’t have a TV tuner built in (so technically it is a Home Theater Display rather than an HDTV). This doesn’t affect most people, because these days you typically use a cable box as the tuner or you use a streaming service like Netflix or Hulu. I have no use for a tuner, so it is not missed, and you can get an external tuner if you need it.

While the built-in speakers are on par with other televisions in this class, they are not impressive. Audio makes such a difference in most programming, and the built-in speakers don’t have the sonic capabilities to fully deliver. It would be a good investment to buy a decent home theater surround sound system so that your audio measures up to the quality visuals from this display. VIZIO has sleek sound bar systems that can deliver big audio in a compact package that would pair nicely with this display.

Overall the VIZIO M50-D1 is a fantastic 50″ home theater display. It has all the latest technologies (4K UHD, HDR, and full-array local dimming) to provide amazing picture quality, while also providing the features to support modern viewing habits (i.e. streaming services). Put it together in a package with an Android tablet at a reasonable price, and the result is an exceptional value.

The VIZIO M50-D1 50″ 4K UltraHD TV has a list price of $849.99, but is currently available for just $649.99 with free shipping direct from Vizio.com. It is also available for the same price at BestBuy.com and Target.com.

The tablet war is heating up this holiday season and now is as good time as any to do your research. If you are looking for affordability with cutting edge features, take a look at the new Scroll Excel 7” Tablet with 3D & 1080p […]

If you have a young child and an iPad or other tablet, chances are they are drawn to it. However, you can’t let them use it, as they could break your expensive electronics, and even worse, hurt themselves with it. Yet you would still like […]

The new Gyration Air Music Remote from Movea, Inc. enables you to navigate, play media, and take complete control of your digital music library from up to 100 feet away using radio frequency technology.