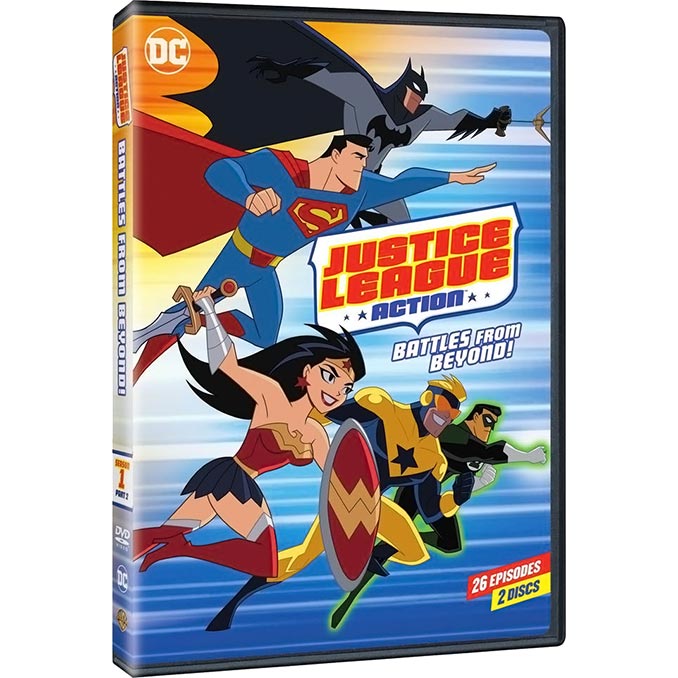 Today Warner Brothers released Justice League Action: Season 1 Part 2 on DVD. This animated television series, which is on Cartoon Network, features the adventures of the Justice League, including Superman, Batman, Wonder Woman, and Green Lantern as they defend earth from supervillains and other threats.

The Worlds’ Greatest Superheroes, The Justice League, save the day in an all new cartoon show exploding with thrills, fun & ACTION! You’ve never seen BATMAN, SUPERMAN, WONDER WOMAN and their galaxy of enemies and allies in adventures like these! The heroic stars of the DC Universe explode into lightning-paced eleven-minute episodes that have been stripped down, stuffed with fun and shot at super-speed into the fast lane! Kids will love that we hit the ground running, no sub-plots, secret IDs or waiting around for the good stuff to start. Moms and dads will embrace the classic DC characters they’ve always loved, with all their unique characterizations, quirks and contrasts intact. Whether defending the Earth, or facing invaders from space, or battling the bizarre forces of magic, our ever-rotating teams of heroes will prove they are up to meeting every challenge! It’s fast! It’s fun! It’s for the whole family!