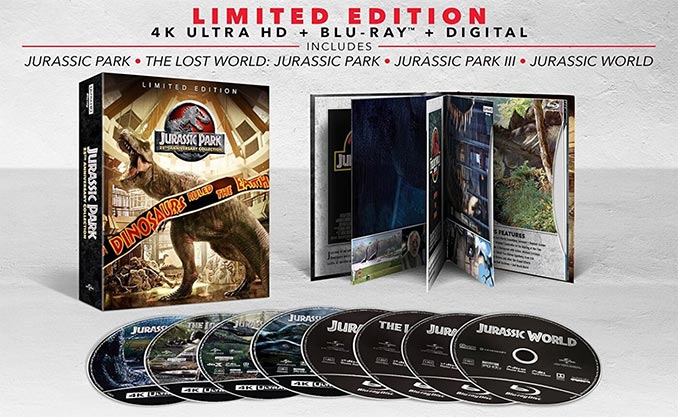 Today’s release of the Jurassic Park: 25th Anniversary Collection marks the first time you can get these films in remastered 4K Ultra HD with HDR (High Dynamic Range). This gives you higher resolution for crisper details along with brighter, deeper, and more life-like color. This set includes four movies: Jurassic Park, The Lost World: Jurassic Park, Jurassic Park III, and Jurassic World. Keep reading below for buying options, including the limited edition version with steelbook packaging.

Celebrate one of the biggest movie franchises of all time with Jurassic Park 25th Anniversary Collection! From Academy Award-winning director Steven Spielberg (Jurassic Park, The Lost World: Jurassic Park), Joe Johnston (Jurassic Park III), and Colin Trevorrow (Jurassic World), dinosaurs once again roam the Earth in an amazing theme park on a remote island. The action-packed adventures find man up against prehistoric predators in the ultimate battle for survival. Featuring visually stunning imagery and groundbreaking filmmaking, these epic films are sheer movie-making magic which were 65 million years in the making. Welcome to Jurassic Park. 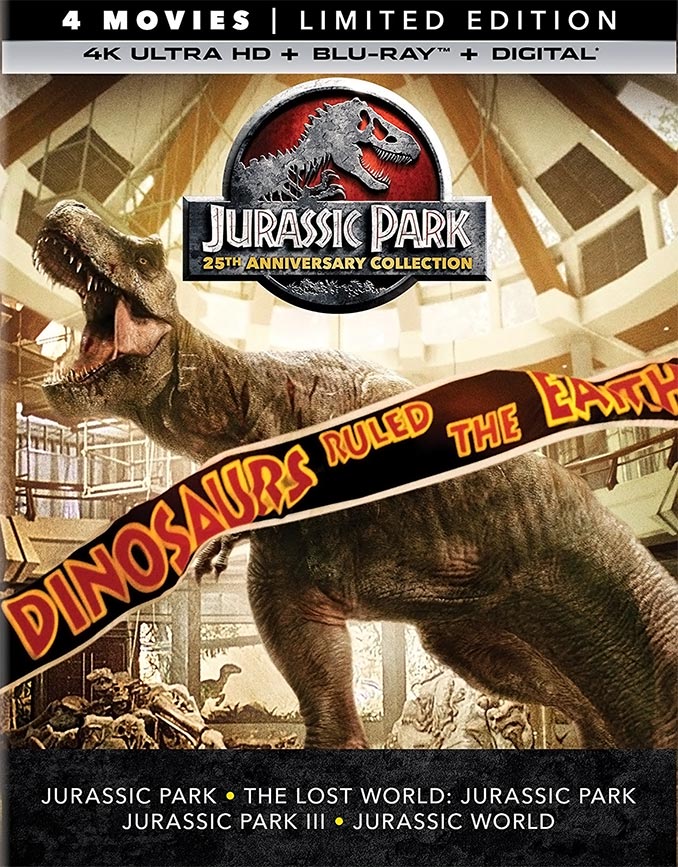 This limited edition 25th Anniversary set features all four films from Steven Spielberg’s classic franchise. In Jurassic Park, guests at a theme park featuring genetically revived dinosaurs are forced to fight for their lives when the dinosaurs break free. In The Lost World: Jurassic Park, the discovery of a second island populated with vicious dinosaurs creates friction between those that wish to preserve the creatures and those that which to profit from them. In Jurassic Park III, Alan Grant (Sam Neill) is drawn to a dinosaur-covered island by a mysterious couple (William H. Macy and Téa Leoni) searching for their missing son. In Jurassic World, attempts to build a new park on the grounds of the original Jurassic Park go awry when a genetically-modified hybrid dinosaur breaks out.

As usual, collectors need to pay careful attention to which version they buy. This time, Best Buy has the exclusive Limited Edition SteelBook version that comes with 4K Ultra HD, Blu-ray, and Digital copies of the films. It is currently on sale for $54.99, which is $15 off the regular price of $69.99. Regular versions can be found at all major retailers:

Remember, Jurassic World: Fallen Kingdom will be out on June 22, 2018, so try to get a copy of this collection that includes Movie Money for a discount on your tickets. This collection would be great to rewatch in high quality before you go see the new film.