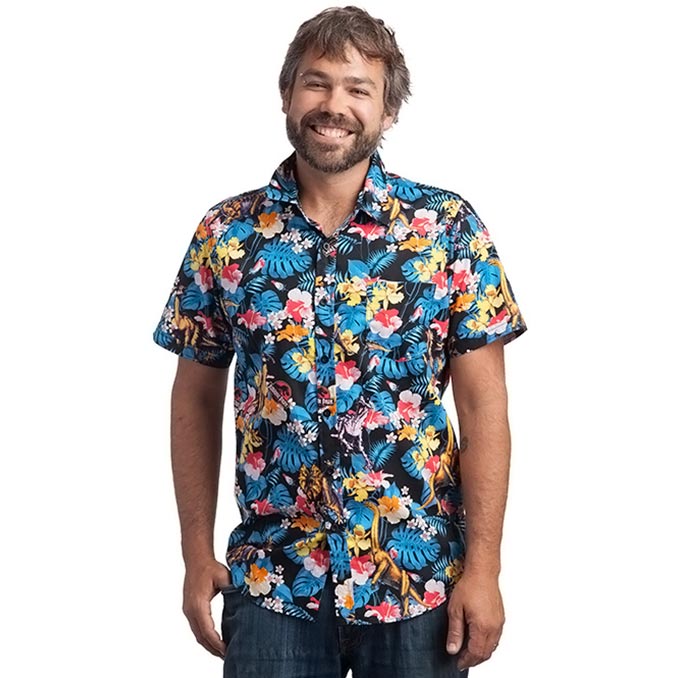 This officially-licensed Jurassic Park Hawaiian Shirt is reminiscent of Nedry’s shirt in the original movie. Dennis Nedry, played by Wayne Knight and better known as Newman on Seinfeld (or to younger people, the See? Nobody Cares meme guy), was the overweight computer programmer that was devoured by a Dilophosaurus. But wearing this shirt doesn’t mean that will happen to you.

Made of 100% cotton, this Jurassic Park Hawaiian Shirt features various dinosaurs, tropical flowers, and the Jurassic Park logo. It is a button up, with a collar, banded sleeves, and a pocket on the left chest. 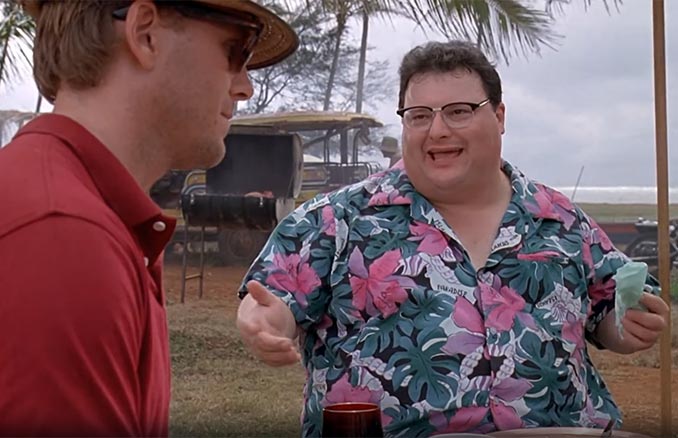 Buy the Jurassic Park Hawaiian Shirt for $39.99 at Think Geek. It is available in sizes small through 3XL.

Most of the time, we feel sorry for dogs that are forced to wear degrading costumes. The Hot Diggity Dog Ketchup and Mustard, Heidi Oktoberfest, and Yoshi Nintendo dog costumes are some that could prompt dogs to voluntarily check themselves into the nearest shelter. Here’s one doggie fashion item that every dog […]

Every day is Casual Friday for Sgt. Angel Batista on Showtime’s “Dexter.” His work wear usually consists of a Hawaiian shirt, a banded fedora, and a leather strapped badge and gun holster. While the sergeant’s fashion sense jives well with Miami’s laid-back, tropical backdrop, Batista is known to be a warrior when it […]

The Star Wars Empire’s Reign Hawaiian Shirt is covered with Imperial Star Destroyers and Imperial Crests. It’s the perfect shirt for fans of the Evil Empire. Who needs palm trees and surfers on their shirt? This is a geeky Hawaiian shirt that you will love. […]

Even if the world ends and the dead start craving living flesh, that’s no reason to let fashion slide so wear the Zombie Apocalypse Hawaiian Shirt to look your best as you try to avoid becoming a midnight snack. Unlike the zombies on The Walking […]

This SHIELD Hawaiian Shirt has been infiltrated by Hydra so it has both S.H.I.E.L.D. and Hydra symbols. Whether you are a tourist or just wearing this shirt at home, this Hawaiian style shirt will show off your allegiance to SHIELD. Or Hydra. Maybe both. It […]

This Star Trek Hawaiian Shirt is sure to make Hawaiian shirts popular again. Why is that? Because it is covered with images of the Enterprise, phasers, tricorders, and communicators. This is the only shirt you need to get the Star Trek party started. Star Trek […]