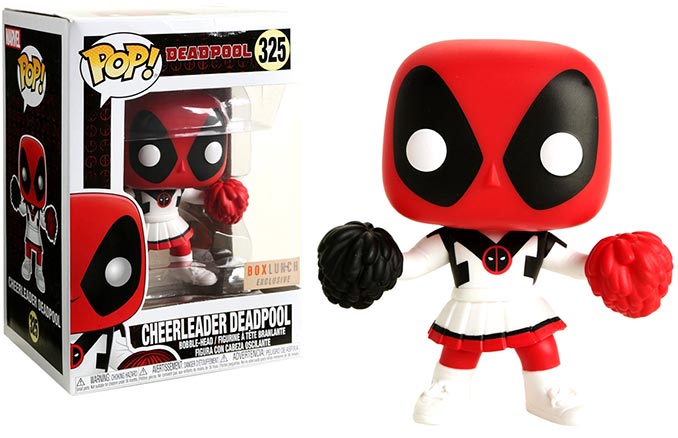 Deadpool figures come in many varieties, but few “pop” as much as this Funko Pop! Marvel Deadpool Cheerleader Figure. It’s Deadpool dressed in a Deadpool cheerleader outfit, and it really catches the eye. It’s awesome, but maybe not quite as awesome as the Bob Ross Deadpool.

This is Funko Pop! Marvel #325, and is a typically sized Pop vinyl figure at 3.75″ tall. It is a BoxLunch exclusive.

This Funko Pop! Marvel Deadpool Cheerleader Figure is available exclusively at BoxLunch, where is costs $12.90.

We’ve seen Bob Ross Vinyl Figures before, but never like this Funko Pop! Deadpool As Bob Ross Figure. Yes, it’s everyone’s favorite Merc with a Mouth looking like he’s ready to pursue the joy of painting as Bob Ross. He doesn’t make mistakes, only happy […]

As we just posted, you can save 30% Off Hot Topic Today. They’re also offering the same deal at another store they own, with this 30% Off BoxLunch Flash Sale. Although Hot Topic owns BoxLunch, the stores don’t carry all the same merchandise, so you’ll […]