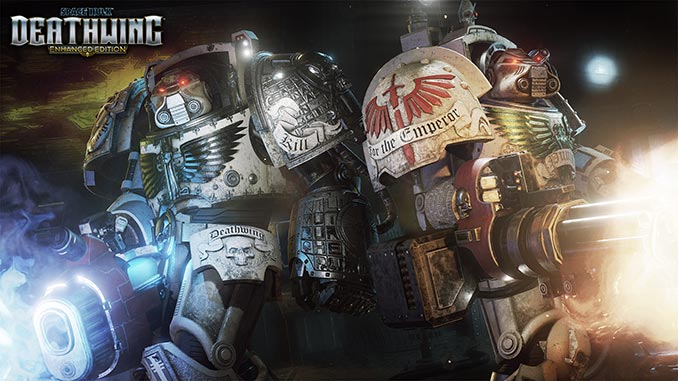 Today, Space Hulk: Deathwing Enhanced Edition Launched for the PC and PlayStation 4 and Streum On Studio released a new trailer to promote the enhanced game. Set in the Warhammer 40,000 universe, Space Hulk: Deathwing is a first-person shooter where you engage in battle against Genestealers as a Space Marine of the Deathwing. As you earn experience across perilous missions, you gain skills, grow stronger, and acquire devastating weapons. Play solo or in online co-op multiplayer with up to 4 players.

With the Enhanced Edition, there are numerous all-new features and upgrades such as the Chaplain class and the highly-replayable Special Missions mode, new weapons, and new enemies.

Space Hulk: Deathwing Enhanced Edition, the FPS from Streum On Studio set in the Warhammer 40,000 universe, arrives today on PlayStation®4 and PC. Don your Terminator armour and wade into battle with today’s Launch Trailer, which introduces the deadliest killers of the galaxy!

The Enhanced Edition brings a wealth of all-new features and upgrades for the ultimate Space Hulk: Deathwing experience, including deep class customization and the Chaplain class, as well as new weapons, enemy types and the highly-replayable Special Missions mode. All of these features are totally free for all Space Hulk: Deathwing owners on PC, while the Enhanced Edition also marks the game’s first ever release on PlayStation 4. New players on PC will also benefit from an exclusive 20% Early Adopter discount.

The all-new Class Customization allows players to personalize both appearance and gameplay for online and offline play, from striking armour sets to powerful weapon attachments. Everything is earned entirely in-game, with no microtransactions now or planned for the future.

Celebrate a decade of World of Warcraft with the WoW Deathwing Polystone Statue, featuring the mighty Destroyer on top of Stormwind Tower. To celebrate the 10th anniversary of World of Warcraft, Sideshow Design and Development and Blizzard Cinematics have joined forces to create this 25.5-inch-tall […]

If you’re a huge LEGO fan, then you might already be into customizing your own little characters and minifigures. For avid collectors and assemblers, nothing gets more annoying than knowing that someone else has got the exact one that you do. And that’s exactly what […]

It’s one thing if you want to smell like The Hulk and wear his Be Angry Fragrance, but achieving the look of The Hulk is a lot more complicated than one may think. Step 1: Put on your angry hat, which is the Hulk Beanie […]

It looks like the American toy company Hasbro will release a Hulk version of the classic Operation physical skills game. Incredible news, don’t you think? Can you fix Hulk up without setting him off? Toxic Gas, Betty Butterflies and other ailments are really getting under […]

This Transforming Hulk features the big green guy as you have never seen him before. It is a water tank with the Hulk and a city battle scene. Watch in fascination as the Hulk bursts through the chamber within 24-48 hours. Just set up the […]