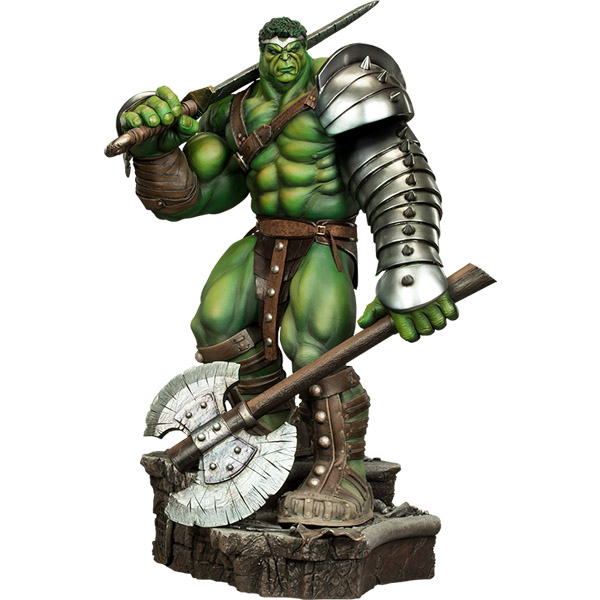 Rage gets royal with the King Hulk Premium Format Figure, featuring the Hulk as he appeared when he returned to Earth during the World War Hulk series.

I’m sure the Illuminati thought they were doing the right thing when they sent the Hulk into the vastness of space in an effort to spare the planet any grief from the big guy’s anger issues. How could they have known Banner’s alter-ego would arrive on a gladiator-style planet, fight his way from slave to ruler, marry the queen, and then return to his homeworld with plans to kick some Illuminati butt?

Standing almost 30-inches tall, this second version of the Hulk from the World War Hulk collection  is ready for battle, wearing his spiked, armored gauntlet and wielding his broadsword and battle axe. The statue’s base resembles a section of the street that’s been damaged during the Hulk’s war against Earth’s heroes.

Bruce Banner’s angry alter-ego eventually ruled an entire planet but he had to pay his dues before claiming his throne and the Gladiator Hulk Premium Format Figure reveals a highly-detailed look at the warrior that was known as Green Scar in the Planet Hulk storyline. […]

You can’t beat the secret powers that rule the world, so you might as well join them and pretend you are one of them. You can do that by using this Illuminati Air Freshener in your car. This 3″ tall air freshener features the logo […]

As you can see from the Gray Hulk Premium Format Figure, before he was mean and green, the Hulk was gray and… ummm… well, he was gray. When the Hulk first appeared in 1962, the art of mass producing colored comics wasn’t as refined as […]