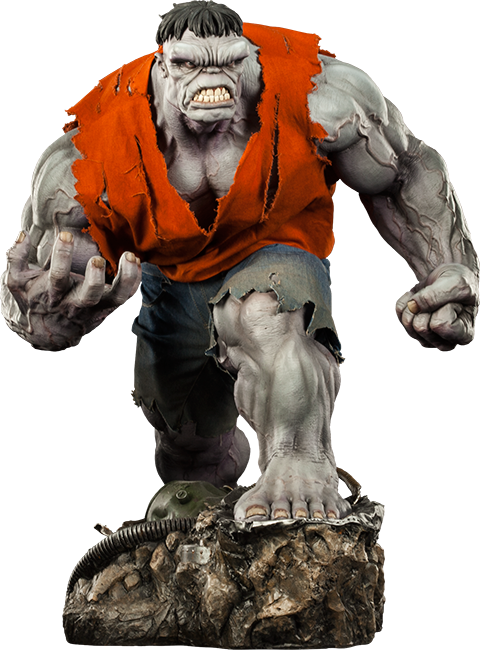 As you can see from the Gray Hulk Premium Format Figure, before he was mean and green, the Hulk was gray and… ummm… well, he was gray.

When the Hulk first appeared in 1962, the art of mass producing colored comics wasn’t as refined as it is today. Stan Lee wanted the Hulk to be gray but he was never the same tone, even appearing green every now and then. Marvel decided to stick with green so Gray Hulk is a bit of a novelty, even though he did return to that skin color during his Joe Fix-It days.

The 20-inch-tall figure features all the classic imagery Hulk fans expect – the rage-filled snarl, the shredded shirt (which can be removed), and the bowl haircut that Mr. Anger seems to inexplicably get every time Bruce Banner loses his temper.

The Gray Hulk Premium Format Figure will be available January 2015 but it can be pre-ordered now for $549.99 (or for as little as $61.87/mo) at Sideshow Collectibles.

Bruce Banner’s angry alter-ego eventually ruled an entire planet but he had to pay his dues before claiming his throne and the Gladiator Hulk Premium Format Figure reveals a highly-detailed look at the warrior that was known as Green Scar in the Planet Hulk storyline. […]

It’s one thing if you want to smell like The Hulk and wear his Be Angry Fragrance, but achieving the look of The Hulk is a lot more complicated than one may think. Step 1: Put on your angry hat, which is the Hulk Beanie […]

By now, most men and women have already heard of or read the steamy novel “Fifty Shades of Grey.” That’s why it’s currently an opportune time to give the 50 Shades of Gray Book as a gag gift. This spoof on the worldwide bestselling novel gets […]

Use these Slash & Serve Shredded Meat Claws to make quick work of your meals like an animal. It will cut prep time in half. No pun intended. Just channel your inner wolf and tear it up because you have a beastly hunger. They make […]