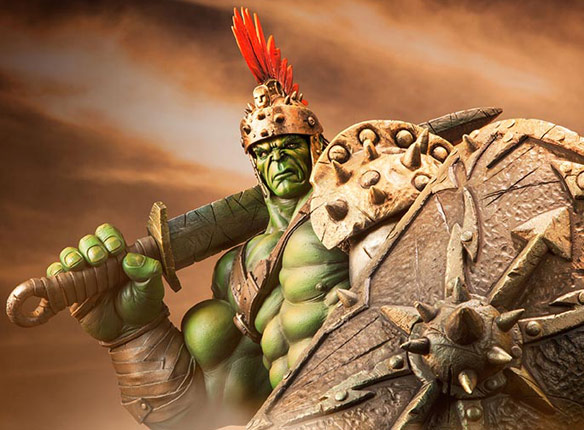 Bruce Banner’s angry alter-ego eventually ruled an entire planet but he had to pay his dues before claiming his throne and the Gladiator Hulk Premium Format Figure reveals a highly-detailed look at the warrior that was known as Green Scar in the Planet Hulk storyline.

Prepared for battle in his helmet, armor, and leather kilt, Gladiator Hulk stands over 30-inches tall and wields a hefty broadsword and shield, along with the removable controller disk the Red King used to force the Hulk to do his bidding.

The limited-edition Gladiator Hulk Premium Format Figure will be available April 2014, but can be pre-ordered now for $599.99 (or for as little as $67.50/mo) at Sideshow Collectibles.

As you can see from the Gray Hulk Premium Format Figure, before he was mean and green, the Hulk was gray and… ummm… well, he was gray. When the Hulk first appeared in 1962, the art of mass producing colored comics wasn’t as refined as […]

Recently, I was teased for bringing a 256MB SD card to a meeting. So what? At least it wasn’t a floppy disk. Since floppies are now considered antiques, and memory cards with limited storage are following close behind, there are all sorts of retro products created in memoir of poor old floppy. So […]