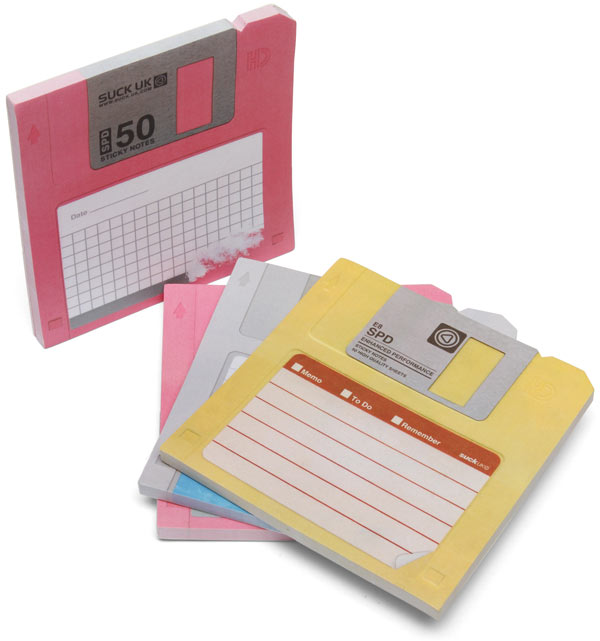 Recently, I was teased for bringing a 256MB SD card to a meeting. So what? At least it wasn’t a floppy disk. Since floppies are now considered antiques, and memory cards with limited storage are following close behind, there are all sorts of retro products created in memoir of poor old floppy. So far, we’ve found the Recycled Floppy Disk Notebook and Floppy Disk Shaped CDR.

Now we have Floppy Disk Sticky Notes that can only be owned by those who survived the dark ages of the 2000 switch, dot matrix printers, all the way back to playing Oregon Trail on the Commodore 64. 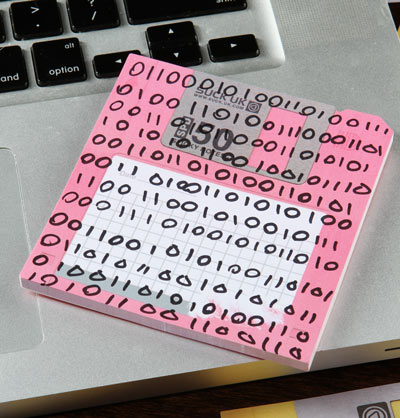 These sticky notes have a way of catching the eye, because you just don’t see floppy disks lying around anymore. Some kids might even be baffled as to what these things are.

The size of each 3.5″ sticky note has “generous space” for jotting down messages, and you can’t beat the classic pink, yellow and grey colors.

The 3-pack of Floppy Disk Sticky Notes is available through Britain’s Gizoo for £7.49 and Think Geek for $9.99.

It reminds me that we also featured the SD Old School Photo Album, since real photo album books are starting to become uncool too.

I look back and find it hard to image that we used to install computer software using floppy disks. If you can still recall, each disk can only store a maximum of 1.44 MB. Because of this size capacity, most of the data and files […]

Alas! A second life has been breathed into the floppy disk. Etsy vendor Jim Buda has salvaged old floppies and computer parts to create the Floppy Disk Pen Holder. It’s the perfect size to hold a bunch of pens, scissors and office supplies, and you score extra bonus points […]

Remember floppy disks. You always wanted to use them as drink coasters, especially when they became obsolete. Well, now you can. These Floppy Disk Drink Coasters will keep your furniture safe and there is no data inside to get hurt. You get a set of […]

We all use sticky notes to help remind us about important things, but Doctor Who fans expect a bit more from their sticky notes than just plain yellow paper. We want notes fit for a Timelord. These Doctor Who Sticky Notes deliver. You get 6 […]

I remember the days when I used to come home with a case of mini floppy disks in hand, all happy and excited that I could finally get to save documents and images and take them with me to access on another computer. And to […]

Your notes won’t get any stealthier than these Ninja Sticky Notes. If you were a huge note passer way back when you were still in high school and always got caught, then you might want to try your luck with these. They won’t help you […]

Talk To The Hand Sticky Notes

I don’t know about the rest of you, but we love to sneak breaks at GeekAlerts… and the best way to stay out of trouble with the boss is to have a cool note pad waiting for him on our desk.  The Talk To The […]

The Sushi Sticky Notes are a marvel for any of the geeks out there who consider themselves to be fans of Japanese products. Eating sushi is great, but our stomachs can’t bulge forever, eventually we have to stop indulging ourselves (or die.) So, for those […]

Floppy Disks sure bring back memories. They lived up to their name, being floppy while storing not very much data and their drive bay took up nearly half the size of the computer. At least they had thinness going for them. Now you can relive […]

I don’t use many sticky notes aka Post-It notes, but if I did I would use these Block Notes. They are Post-It notes shaped like Tetris pieces. I’m not positive, but I think they may even match the colors of the game pieces.