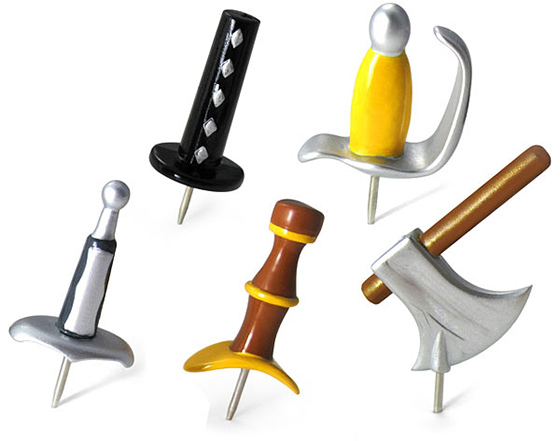 Geeks are not physically violent by nature, but put them in fictitious arenas of warfare like chess, Halo or role-playing games and they become downright medieval and scary. Made to delight geeks and weapon lovers alike, the Medieval Weapons Pushpins Set is a silent but deadly way to post serious notes and action items on bulletin boards, cubicles or walls. 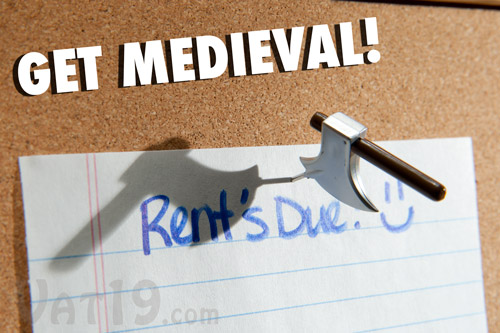 Medieval Weapons Pushpins will turn the wimpiest, most passive aggressive notes into veritable royal decrees. Tired of roommates not doing the dishes? Leave a note punctuated with a broadsword pushpin and we’re sure you’ll have spic ‘n span cookware in no time. 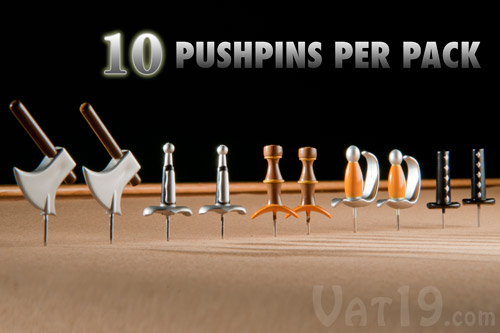 Why settle for lame-o thumbtacks when you can have no-nonsense weapon pushpins to maintain order in the kingdom? The Medieval Weapons Pushpins Set is available at Vat19.com for $9.95. They also have them for $9.99 over at ThinkGeek.com.

If these items are up your alley, you might also want to glance at these intriguing products: Samurai Sword Chopsticks, Lego Battles Ninjago Game, and Gummy Army Men.

Does anyone know where the insult ‘pinhead’ came from exactly? I think the word existed before the guy from Hellraiser hit the big screen. Perhaps these Pinhead Pushpins capture who the true pinheads really are: mindless dudes in blue suits squandering loads of other people’s cash on Wall St.?

Your cork board will be abuzz with these Insect Pushpins. These pushpins will add some style and humor to your cork board. You get a set of four insect pushpins. Two ants and two mosquitos. You may even have the urge to swat at them, […]

It’s getting hot outside. It’s time to go medieval on your drinks with this Medieval Weapons Ice Tray, which puts frozen weapons in your drink. Cool down with some ancient weapons this summer. You get 6 Different weapon molds in this tray. An axe, a […]

This Medieval Cheese Board let’s you act like an executioner while cutting cheese for your guests.Off with it’s head.This fun kitchen piece consists of a shield-shaped board made of rubberwood and a set of 3 knives that include two battle axes and one spear. It […]