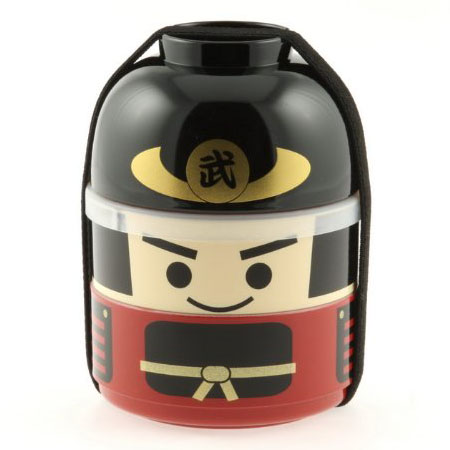 Recently, we wrote about the Yum-Yum Bento Box Recipe Book which then led to a search for cool-looking bento boxes. While most of the food in this cookbook is adorable, certain boys might want their lunches to have more of a macho exterior. The Kotobuki Samurai Warrior Bento Set is one stackable bento box that will appeal to kids who prefer a dose of hi-yah at lunch time.

The way that the samurai’s hat turns into a bowl is very clever. If it were upside-down, though, maybe the bowl could be used as an extra storage compartment for soup. Still, the bowl would be handy as a place to put fruit peels, seeds, or shells from a hard-boiled egg. You will get creative and somehow find ways to make it work. Non-leaky foods could possibly be stored in there, like an apple or a muffin. 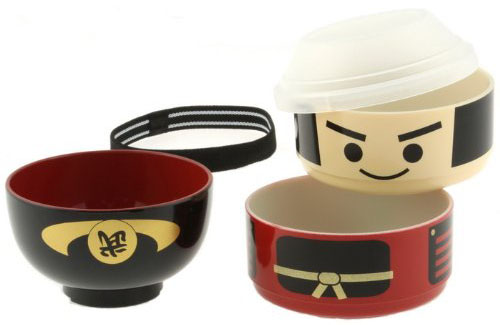 Kotobuki Samurai Warrior Bento Set
This cute samurai warrior bento box set has two tiers to keep food in separate compartments, and the top tier has a press on lid to prevent leaks. In addition, the included bowl makes preparing instant soups or broths to go along with your bento lunch easy and fun. An elastic band is included to secure the set together.

LEGO Ninjago, which is a series all about ninja and samurai, is quite popular right now, and it just so happens that this samurai set has characteristics similar to LEGO minifigures. Bonus!

The Japanese-made Kotobuki Samurai Warrior Bento Set is $18.99 at Amazon.com. Don’t be ashamed, man-children, if you want one for yourself.

Summer means more dining al fresco under a blue sky. But you don’t want lunches packed in a lifeless, brown lunch bag or a plastic grocery bag. Lunch would look and taste better packed in the svelte Ojue Lunch Box.

The Dark Side meets the way of the warrior with the Darth Vader Samurai Warrior Doll as Feudal Japan enters the Star Wars universe. Inspired by classic musha-ningyô (warrior dolls), Lord Vader stands tall in Samurai armor that includes a detailed helmet, boots, robe, and […]

I don’t know about you, but right about now warm soups and sammies are just what the doctor ordered. But it’s hard to fix up a nice, hot meal when you’re too slammed to break away from the computer. The USB Heated Bento Lunchbox lets you bring your hot […]