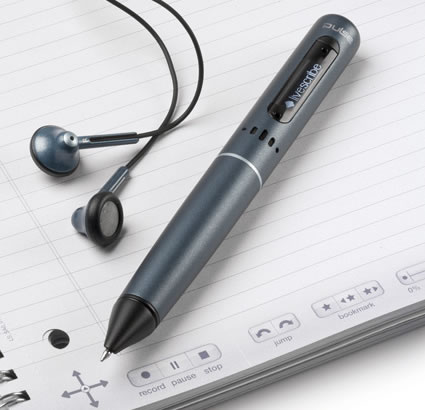 The Livescribe Smart Pen is a useful tool capable of recording audio and text, and then have it transferred to a computer through a USB docking cradle.

At first glance the Smart Pen looks like a very oversized pen and that’s because it contains an ARM processor along with a host of other digital accessories including a built-in speaker, headphone jack and OLED display. While writing, the infrared camera in the tip scans special dot-covered paper at 72 Hertz and records everything you scribble down.

At the same time, users can record audio through two noise cancelling microphones located near the top of the pen. For extra noisy environments, the Livescribe comes with special 3D recording headphones which, according to company reps, can record a whisper from the back of a noisy auditorium. Recorded audio is synchronized to the text for easy playback.

Why just use a pen for writing, when it it be a multi-function tool? This Messograf Caliper Pen servers several purposes. First, it s a retractable ballpoint pen, and a damn cool looking one at that. Second, it is a Vernier caliper that can be […]

Wearing a motorcycle helmet can seriously interfere with communications, unless you have the UClear HBC100 Bluetooth Helmet Communicator. Between the wind whipping by and the roar of the engine, a typical wireless headset would be worthless. However, the UClear HBC 100 uses proven military technology […]

Back when I wasn’t as into instant messaging and chatting, (or rather, back when I was still more of a noob), I always used to find it puzzling whenever I saw or heard people use “lol” or “rofl” or “lmao.” They definitely don’t make any […]