I recently went on a trip and went through a lot of trouble when I realized that I had left my pen at home and had a ton of forms to fill out at the airport. The first few times, I just borrowed a pen from the person beside me. He eventually threw me an irate look, so I decided to go to a store at the airport and buy a pen–and you know how much they overcharge the stuff they sell at the airport. Ouch!

You never know when you might need a pen, so better latch this one on to your keychain: the True Utility Telepen Telescopic Keychain Pen. It collapses into a tiny cigarette-shaped keychain so it’s not bulky at all. And really, would you leave your home without your keys?

There are a lot of other pens that are more than meets the eye that you might want to check out too, like the Multi-Gadget Pen, 3-in-1 Pen, and the Ultimate Geek Pen. 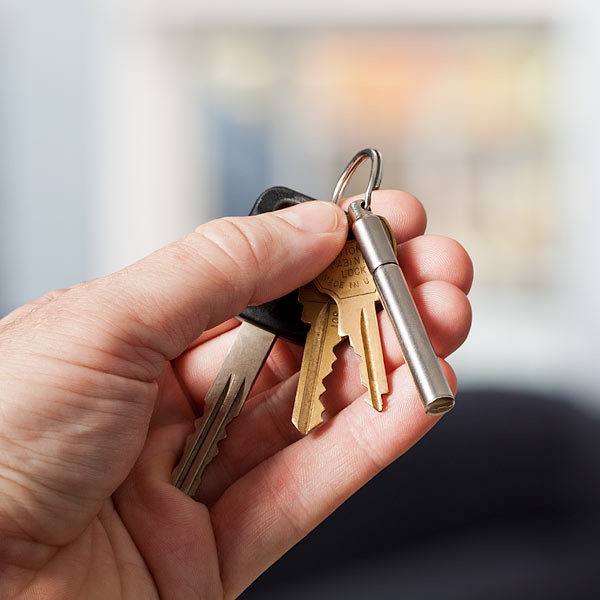 It’s a full length pen that is as small as your house key and hangs from your keychain. This stainless steel beauty extends telescopically to just over 4.5″ so you can write comfortably. When you’re done, just pop it back down to less than half its size and it goes back to being a mild-mannered keychain. The Telepen even comes with three refills, because you are really going to use it that much!

The Telepen Telescopic Keychain Pen is available from ThinkGeek for $7.99. You can also order them from Amazon.com and Amazon.co.uk.

You wouldn’t want to use a real lightsaber on your touchscreen but the Star Wars Telescopic Lightsaber Stylus has been approved by the Jedi Council of the New Republic, and two Sith lords even gave a thumbs-up. Unfortunately, after giving the thumbs-up, the Sith lords […]

When you need to pop open a bottle of Corona, it’s easy to be prepared. Just about every Pocket Multitool has a bottle opener, plus they’re even built-in to Caps, Sunglasses, and iPhone Cases. But if wine is your drink of choice, those bottle openers […]

Have you ever been in a situation where you needed your pen the most–and it just ran out of ink? That has happened to me a lot of times, which has resulted in some checks remaining unsigned, some forms remaining unsubmitted, and a whole lot […]

For all you Star Wars and keychain fans out there,the R2-D2 LED Light Keychain is a perfect addition to the Lightsaber Keychain, LEGO Minifigure Keychain and Tardis Keychain.  R2-D2 has always been a fan favorite and now you can carry him with you at all […]

We understand that not everyone can carry around Giant Swiss Army Knives with them at all times. Alternatively, there are simpler all-in-one’s that’ll help McGyver your way through some of life’s technical difficulties. There’s the Kelvin 23 Super Tool for times when you don’t want to […]

Fans of fertility, procreation, and gag gifts, have we got the keychain for you. Some people get freaked out by the sight of ultrasound photos posted on Facebook, but that’s nothing compared to the looks of this Pregnant Woman Keychain with Fetus. Not only is the […]

If you have a best friend that shares your love of the Caped Crusader, you need to get this Dynamic Duo Batman Keychain Set. It’s a pair of keychains that combine to form the iconic Batman symbol. Made of thick black acrylic, these handmade keychains […]