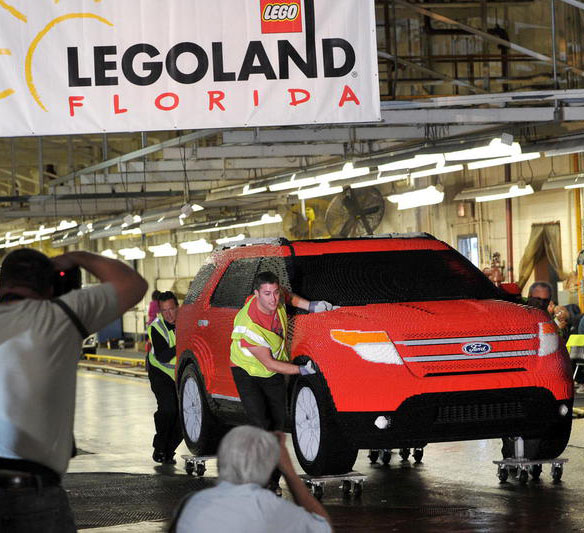 Holy SUVs, Batman! This fiery-red Life-Sized LEGO Ford Explorer is completely made of our favorite toy bricks from wheel to roof.  It probably cost more to make the LEGO version than manufacturing a real Ford Explorer. Did they superglue every one of the 380,000 bricks they use, because my puny vehicles fall apart in a matter of minutes.

It seems like sensational LEGO-related stuff has been popping up like Li-Lo jail stories in the tabloids. There was the humongloid Ego Leonard that washed ashore on a Florida beach, then there was the mind-boggling 3D LEGO army drawn with chalk in Sarasota, and now this LEGO Ford Explorer is parked at the newly-opened Legoland in Florida. Publicity stunt? You bet your flash mob dollar! What a crafty way to market LEGOs and Fords! 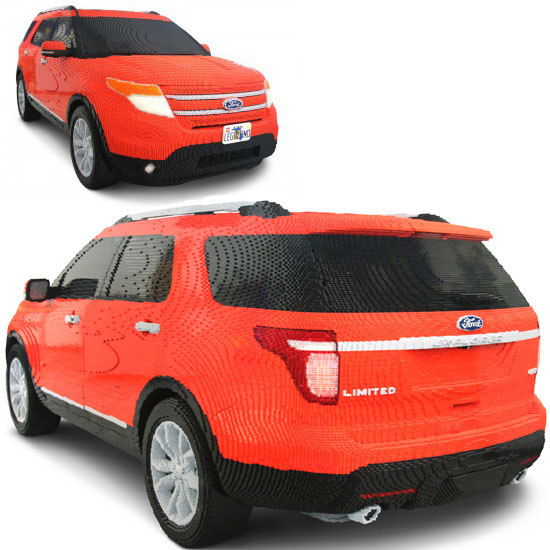 Having a Ford Explorer made of LEGOs really gives us geeks something to appreciate.  The edgy LEGO bricks give the car a pixelated look (something some of us have forgotten with all this 3D technology), and like always, LEGO has made us proud.

That’s why we the GeekAlerts crew likes to showcase all sorts of LEGO items. LEGOs tend to link with other things we love in life, like Star Wars, Pirates of the Caribbean, and the VW Camper Van. And a hundred years from now, I’m sure the story will be quite the same. Adults and kids will still love LEGOs, though they’ll be building other sorts of vehicles and the SUV what the Model-T’s are to us now.

Here is a cool time lapse video of this LEGO SUV being built.

Did you hear about that 8-ft. Lego Man statue that washed up on Florida’s shore recently? It’s very mysterious, since neither Legoland nor Lego company are taking credit for the stunt. Someone (probably a highly talented geek) had the gumption to fabricate a humongous Lego statue, made to scale […]