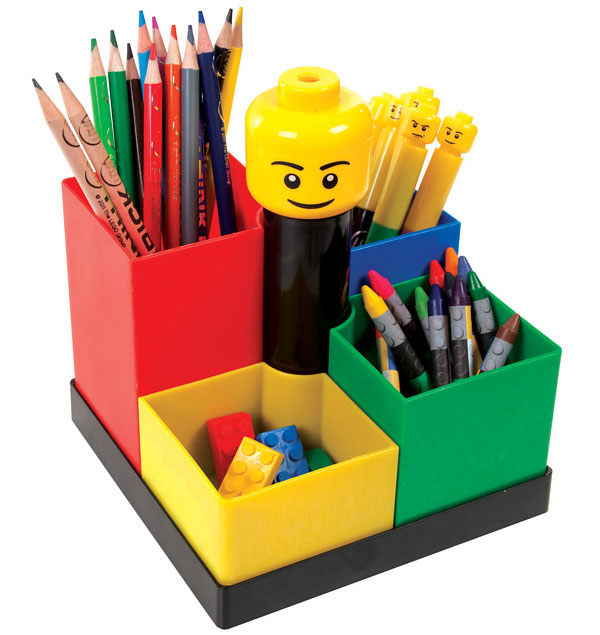 Did you hear about that 8-ft. Lego Man statue that washed up on Florida’s shore recently? It’s very mysterious, since neither Legoland nor Lego company are taking credit for the stunt. Someone (probably a highly talented geek) had the gumption to fabricate a humongous Lego statue, made to scale then supersized. China has its Terra Cotta Soldiers but the US has a plastic Lego guy on steroids. Chucking it into the ocean… not sure what that’s all about. Maybe the artist in question has seen one too many episodes of “Dexter.” If no rightful owner claims the Lego giant, then the big guy goes up for auction on eBay. Until more info is disclosed, we’ll just have to settle for normal-sized Lego novelties, like this tidy LEGO Stationery Desk Carousel that is chock-full of art supplies, including pens topped with Lego Man heads. 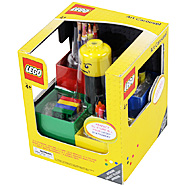 This colorful and modular carousel is what every office, classroom, and kid’s room needs. It’s easy to locate, and has four different-sized compartments to hold a variety of items.

Though it might not be as hot an item as the Lego statue, it’s still a rare find considering that it’s available for pre-order through Britain’s retailer Firebox for the time being. Allegedly, the carousel is set to hit the market in December this year.

The LEGO Stationery Desk Carousel is £17.99, or roughly $29 US, €21 at Firebox.com. Firebox can send you an email to alert you out when the item arrives in stock.

Do you need a cool storage space for your LEGOs or are you trying to find away to entice your kids to cleanup after playing?  GeekAlerts has just what you need; the LEGO Storage Heads.  These storage bins offer plenty of stylish storage space and […]

Have you ever found yourself in a situation where you wished you had three hands? Maybe you’re working on a project that that requires a little extra light, but you need both hands and a third would be great for holding the flashlight. That’s where […]