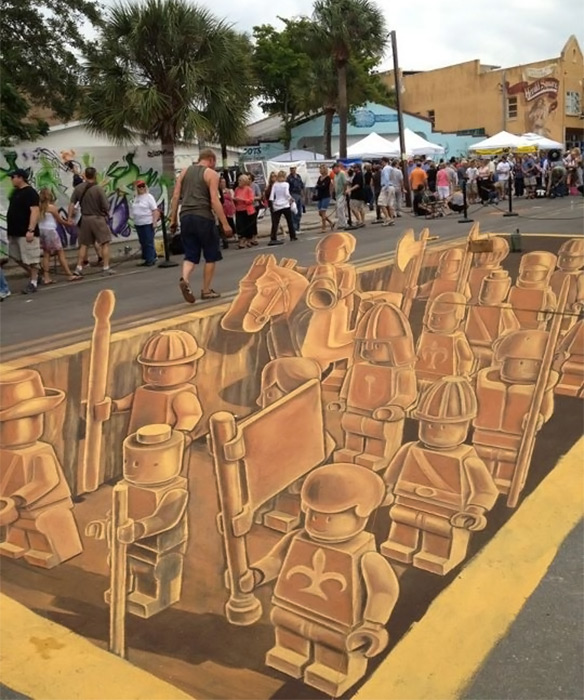 Last week we mentioned in passing about the Giant Lego Minifigure Statue that mysteriously washed up on a Florida beach. Apparently that was part of a publicity stunt by the artists behind the impressive Sarasota Chalk Festival 3D LEGO Army. Above is a photo from reddit of the finished artwork, and it is remarkable that such a 3 dimensional drawing could be created with chalk on a street. Below is a photo of the work in progress as they lay down a grid to guide their work and begin creating the chalk outlines of the Lego figures. At the bottom of the page is the concept drawing of what they had planned.

The group behind this impressive street painting is Planet Streetpainting, a collection of artists from the Netherlands. Finding inspiration in the Terracotta Army of China, they decided to give this 3D street painting a modern twist by using Lego minifigures instead of Chinese statues. Leon Keer is the art director, and fellow Dutchmen Remko van Schaik, Peter Westerink, and Ruben Poncia worked together with him to complete this amazing 3D street painting of a Lego army. 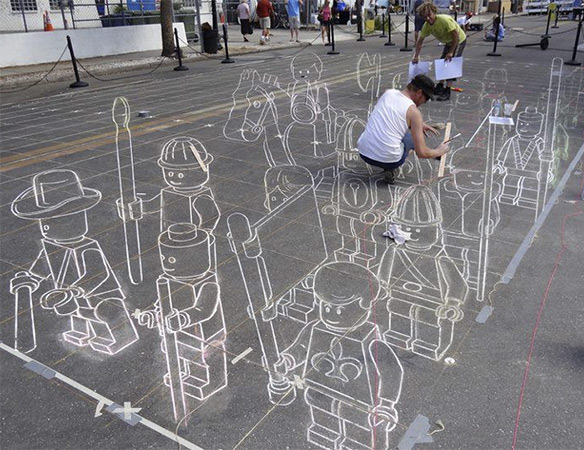 Planet Streetpainting is a collaboration of street artists based in the Netherlands.  As Planet Streetpainting’s art director Leon Keer is always fascinated about what history reveals. He tries to connects the historical events with current issues in this society. For the upcoming Sarasota Chalk Festival he has been inspired by the discovery of the Terracotta Army of China and Ego Leonard who washed ashore in Sarasota yesterday morning. 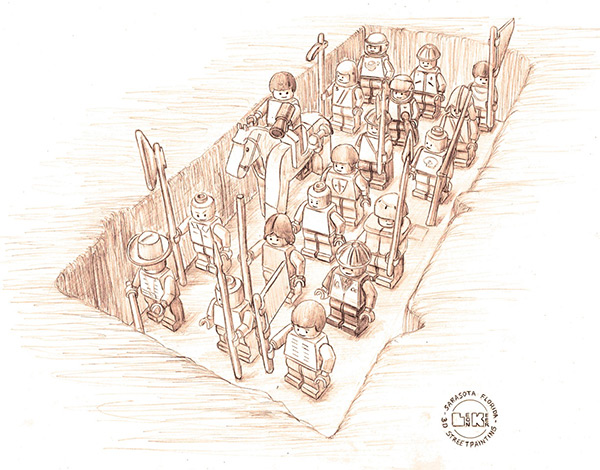 At the Sarasota Chalk Festival 2011 Planet Streetpainting will bring this discovery alive by presenting it as a 3D street painting. However instead of the Chinese Statues he will use lego figures as models for his painting. Everybody knows lego from their childhood as a good tool to explore the imagination. The painting will not be an attempt to change the history, but rather to give something informative to the public and question the existing environment of its opportunism and society control.

See other impressive artwork from the Sarasota Chalk Festival at ChalkFestival.com.

Egg-shaped Sidewalk Chalk is a nice Easter gift for kids that already have too much Easter candy. Instead of more hard boiled eggs that no one will eat, or excess chocolate bunnies and marshmallow peeps that aren’t healthy, this is an egg-shaped goodie kids can […]

You never know when you might get stranded on some island or swept off at sea, right? To at least arm yourself with the basics if such kind of disaster strikes, then simple get one of these Waterproof Festival Survival Kits.

Want droids to bring you your morning cup of Joe? Then you might like the R2-D2 Mug. Too lazy to stir your own drinks? Then the Self Stirring Mug might be more up your alley. Want to leave messages or share your thoughts while chugging […]

Holy SUVs, Batman! This fiery-red Life-Sized LEGO Ford Explorer is completely made of our favorite toy bricks from wheel to roof.  It probably cost more to make the LEGO version than manufacturing a real Ford Explorer. Did they superglue every one of the 380,000 bricks they use, because my puny […]

Kids love making art on the sidewalk so they will love this 3D Sidewalk Chalk Kit. This kit lets kids make their own fun sidewalk chalk which they can then use to draw on the sidewalk. Your child will also learn about the science behind […]