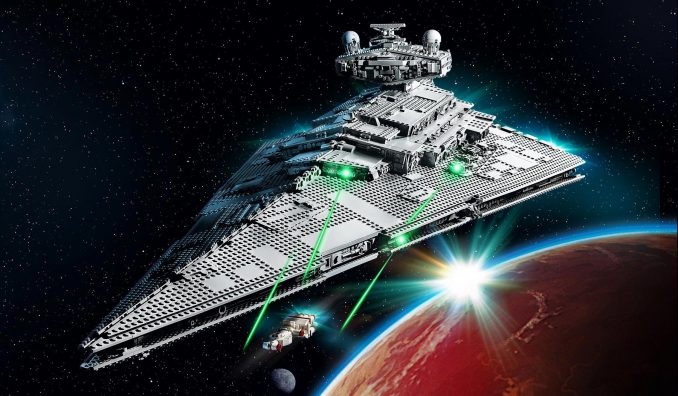 One of the things that makes the Star Destroyer so impressive is its ginormous size. This conveyed the immense power of the Galactic Empire right from the opening moments of A New Hope (and also made for a funny beginning to Spaceballs.) In this respect, the Ultimate Collectors Series LEGO Star Wars Imperial Star Destroyer #75252 will leave even the biggest fans satisfied—it is made up of 4,784 pieces and once constructed reaches a remarkable 43″ in length.

Fans will also love all the details, from the huge engine exhausts and swiveling guns to the tilting radar dish and intricate surface detailing. Best of all, there is a buildable Tantive IV starship to chase down. It is to scale with the Star Destroyer, so it is relatively tiny, and can fit in the docking bay for capture. (Check out the LEGO Star Wars Tantive IV for a large, detailed version of the ship.) There are also two minifigures included, an Imperial Officer and an Imperial Crewmember.

Build and display an icon of the Galactic Empire – the Devastator. With over 4,700 LEGO® pieces, this Ultimate Collector Series 75252 Imperial Star Destroyer model captures all the authentic details of the starship as it appeared in the opening scene of Star Wars: A New Hope, including swiveling guns, a tilting radar dish, huge engine exhausts, intricate surface detailing and of course a buildable scale version of the Rebels’ Tantive IV starship to chase down. This galactic civil war UCS set also includes a display stand with informational fact plaque and 2 Imperial minifigures, making it the perfect LEGO Star Wars collectible for discerning fans.

LEGO Star Wars Imperial Star Destroyer is a LEGO Shop exclusive, where it is listed for $699.99. It is currently available exclusively to LEGO VIPs (free to join) and goes on sale to everyone on October 1, 2019.

Despite being the Rebel blockade runner that’s pursued by an Imperial Star Destroyer in the opening of Star Wars: A New Hope, the Tantive IV doesn’t get the representation in toys like the Millennium Falcon, X-Wing Starfighter, and other Star Wars ships. Finally, this impressive […]