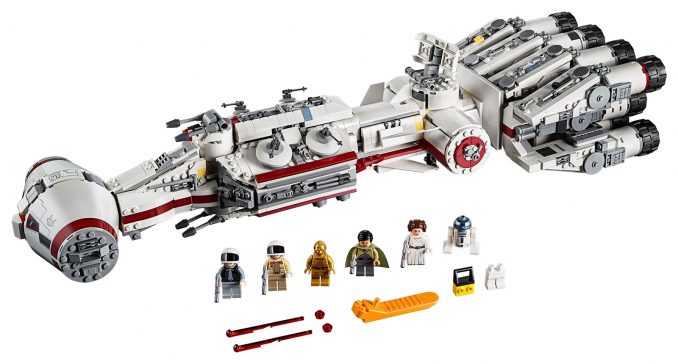 Despite being the Rebel blockade runner that’s pursued by an Imperial Star Destroyer in the opening of Star Wars: A New Hope, the Tantive IV doesn’t get the representation in toys like the Millennium Falcon, X-Wing Starfighter, and other Star Wars ships. Finally, this impressive LEGO Star Wars Tantive IV #75244 building set gives this iconic ship the recognition it’s due.

Comprised of 1768 pieces, the Tantive IV LEGO Star Wars building set allows you to build a 24″ long spaceship loaded with fun details. There are detachable escape pods (for R2-D2 and C-3PO to ride down to Tatooine), elevating gun turrets, a detailed 2-minifigure cockpit, conference area with table, weapon rack and a control console, and 11 massive engines at the back.

Included is an R2-D2 droid figure as well as 5 minifigures: Princess Leia, Bail Organa, Captain Antilles, C-3PO, and a Rebel Fleet Trooper. Accessories include a pair of electrobinoculars, a blaster pistol, and 3 blasters.

Build, play and display a legendary Star Wars™ starship! This LEGO® Star Wars 75244 interpretation of Tantive IV, seen fleeing from an Imperial Star Destroyer in the opening moments of Star Wars: A New Hope, faithfully recreates all of the Rebel cruiser’s signature details, including an elongated hull, detachable escape pods, elevating gun turrets, cargo hold and 11 massive engines at the back. Remove the hull plating of this fantastic LEGO Star Wars vehicle to reveal a detailed 2-minifigure cockpit, conference area with table, weapon rack and a control console with 2 seats. The radar dish also doubles as a convenient carry handle, which makes it perfect for flying around the room. When the mission is over, this amazing kids’ buildable toy also makes a great centerpiece for any LEGO Star Wars collection. The set also includes 5 minifigures and an R2-D2 droid LEGO figure.

Available exclusively at LEGO Shop, this Tantive IV Building Set is $199.99. It is currently out of stock, but backorders are accepted and should ship in about 2 weeks.