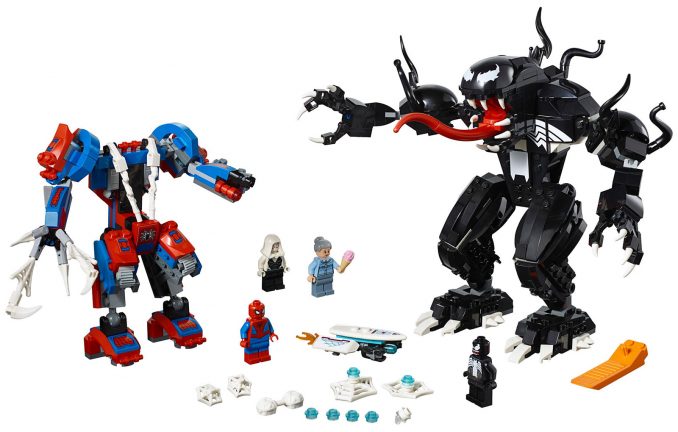 Stage an incredible battle with Spider-Man with Spider Mech and Ghost Spider fighting Venom with Venom Mech to save Aunt May with LEGO Marvel Spider Mech vs. Venom. Containing 604 pieces and 4 mini-figures, it’s part of the LEGO Marvel Super Heroes and is set #76115.

LEGO Marvel Spider Mech vs. Venom features detailed buildable mechs that are poseable and include mini-figure cockpits. Spider-Mech features a shooter (to fire tech spider or web elements) and a gripper. Venom Mech features a long tongue and gripping claws that can grab mini-figures.

Included with the set are mini-figures of Spider-Man, Ghost Spider, Venom, and Aunt May. Accessories include Ghost Spider’s hover board (featuring 2 stud shooters and a translucent flame exhaust), Aunt May’s ice cream, and 9 assorted web elements.