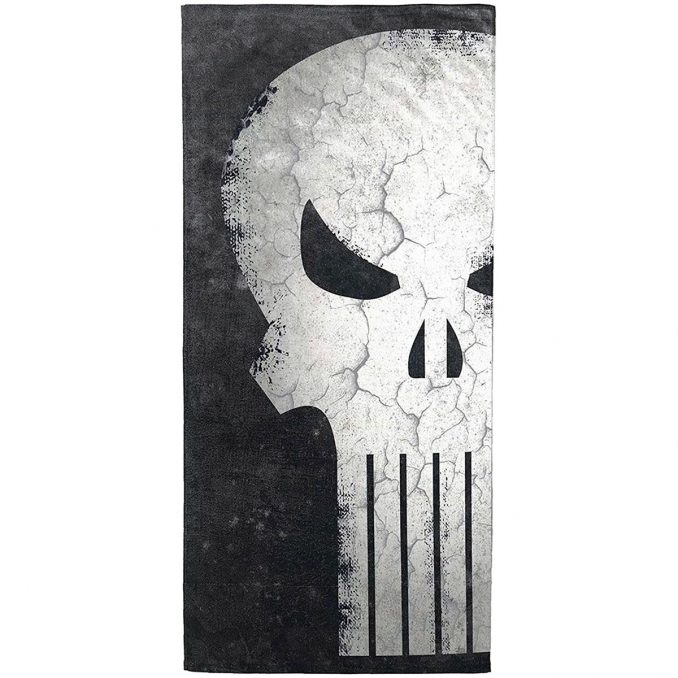 You’re at the beach and you’re about to hit the water. As if it offers any real protection, you “hide” your wallet, keys, and phone in your shoes, just like almost everyone else. Not exactly a foolproof plan to thwart thieves, but hopefully any crooks will have second thoughts about stealing anything when they see this menacing Punisher Skull Beach Towel.

You don’t want to be worrying about your cool beach towel being taken while out splashing around in the water. With this epic Punisher Skull Beach Towel, you’ll never have to worry again.

Featuring the Punisher’s signature skull, this awesome 28 x 58-inch beach towel will keep all your stuff high and dry while also letting others know to stay away unless they want to tussle with someone cool enough to have this awesome Punisher Beach Towel.

Purchase this Punisher Skull Beach Towel for $19.99 at SuperHeroStuff.

Summer is here, and it’s time to hit the beach with this Rick And Morty Pop Art Beach Towel! Why keep using your same tired old towel, when you can get this awesome Rick and Morty beach towel that features 6 pop art portraits of […]

When it’s time to hit the beach or pool, you can count on the Captain America Beach Towel to keep you company and get you dry while showing off your geek love for the First Avenger. Made of soft, absorbent terrycloth, this full-size polyester beach […]

For a geeky day at the beach, make sure that you pack this Doctor Who TARDIS Beach Towel. The design is great and it looks just like the front door of the TARDIS. Instead of entering it, you will just be laying on it. No […]