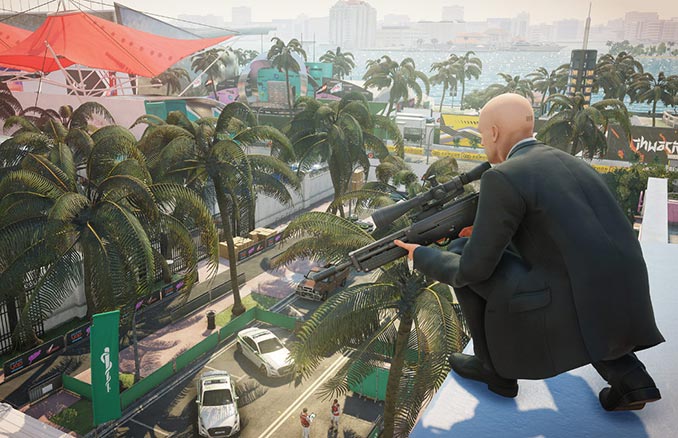 Today, IO Interactive released the Hitman 2 Announce Trailer and announced that the game would be available on the PC, PlayStation 4, and Xbox One on November 13, 2018. Like the previous games in the series, it is a third-person stealth shooter where you play as the assassin, Agent 47.

Hitman 2 promises a global adventure, with 6 new exotic international locations, including a colorful sun-drenched Miami setting and a dark, dangerous rainforest. As typical for the series, you will have detailed interactive environments to explore, as well as a wide array of weapons, tools, and disguises as you employ various stealth techniques to creatively complete your missions.

Hakan Abrak, CEO of the game developer IO Interactive said, “We are very proud to announce HITMAN 2 as the next exciting chapter in our ever-expanding world of assassination. Building on the success of our previous game, HITMAN 2 introduces exciting new features, new modes, and franchise firsts to make for a larger and richer game.”

While Hitman 2 is a sequel to 2016’s Hitman, it is actually the tenth game in the franchise. The first, Hitman: Codename 47 was released all the way back in 2000. Hitman 2 is the company’s first release since becoming independent again, after the management buyout from Square Enix Europe in June 2017.

HITMAN 2 will take you on a global adventure across a mix of bustling international locations, including a vibrant Miami setting with the colorful ambiance of an in-progress motorsport race bringing a new backdrop to the series. From sun-drenched streets to dark and dangerous rainforests, each intricate location provides multiple paths to discover and unparalleled game depth.

Continuing the ultimate spy thriller story, HITMAN 2 allows players to take on the role of the masterful Agent 47 and embark on a mission to hunt the elusive Shadow Client and unravel his militia once and for all. However, when 47 learns the hidden truth about his past, nothing will ever be the same.

Make the world your weapon. Become Agent 47 and dismantle the elusive Shadow Client’s militia. Think deadly as you travel the globe to take down your targets in 6 new sandbox environments, improvise each assassination, and explore the franchise’s most advanced installment to date.

Hitman 2 will be available in 4 editions: Standard, Silver, Gold, and Collector’s Editions. The Standard Edition is just the game and costs $59.99. The Silver Edition, which is only available digitally, includes an Executive Pack of exclusive in-game content and Expansion 1. It is $79.99. At a price of $99.99, the Gold Edition has everything from Silver and adds in Expansion 2 and Hitman 2 Early Access (4 days early). Most expensive, at $149.99, is the Collector’s Edition. It is only available for PS4 and Xbox One (no PC version) and is not available digitally, as it includes physical collectibles. It includes everything from Gold, plus a Collector’s Pack of exclusive in-game content and a set of physical collectibles (gun case replica, exclusive steelcase, bullet keyring, rubber duck, and signature coin.)

You can pre-order Hitman 2 for the PC on Steam, for the PS4 at the PlayStation Store, and for the Xbox One at the Microsoft Xbox Store. You can also pre-order the game for PS4 or Xbox at GameStop, which is the only place to get the Collector’s Editions.

Snipe with your friends or work alone in HITMAN: Sniper Assassin as this new experience will reinforce your natural skill to think deadly.

They teased it yesterday, and today LEGO released the LEGO DC Super-Villains Announce Trailer. Watch it to get a preview of the new video game that will be released on October 16, 2018 for the PC, PlayStation 4, Xbox One, and Nintendo Switch. It’s good […]