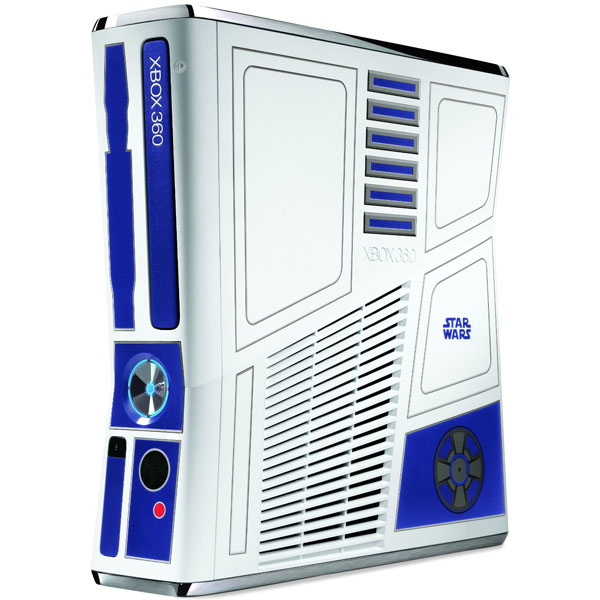 Released in April 2012, Star Wars teamed up with Xbox to bring you the Limited Edition Kinect Star Wars Xbox 360 Bundle and the Xbox has never looked so good. The console is designed to resemble R2-D2 and the controller has a gold finish reminiscent of C-3PO, but it doesn’t end with the Star Wars themed good looks.

Included is the Kinect Star Wars video game, which lets you experience the world of Star Wars like never before. Use your body in conjunction with the Kinect motion sensor technology to wield the power of the Force like a Jedi and immerse yourself in the Star Wars experience you’ve always dreamed of.

“Kinect Star Wars” brings Star Wars to life like never before. Harnessing the controller-free power of Kinect for Xbox 360, “Kinect Star Wars” allows fans to physically hone their Jedi skills, wield the power of the Force in their hands, pilot iconic starships and vehicles, rampage as a vicious rancor monster or even dance with iconic Star Wars characters. Using full body motions, players can live out the ultimate Star Wars fantasy to use the Force, battle with a lightsaber and more — no controller required.

The Limited Edition Kinect Star Wars Xbox 360 Bundle gives you a chance to enjoy Star Wars as you work up a sweat playing the Kinect Adventure Game and Kinect Star Wars Game. You can purchase this bundle and start enjoying your Star Wars R2-D2 themed Xbox and C-3PO controller from Amazon.com from $391.99, at Best Buy for $399.99 and at Toys R Us for $399.99.

Star Wars I Love You, I Know Bundle

The Star Wars I Love You, I Know Bundle captures an iconic scene that any Star Wars fan would love to act out with their special someone on Valentine’s Day… minus the freezing in carbonite. Princess Leia looks at Solo and finally reveals her feelings […]