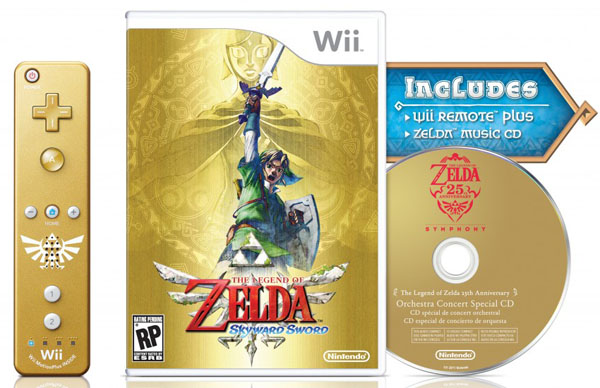 Gamers who love playing the Legend of Zelda will definitely want to pre-order the limited edition Legend of Zelda: Skyward Sword Bundle for Nintendo Wii. Be among the first to own it when the item leaves stores shelves on November 20, 2011.

After an announcement in 2010, our favorite elf is sharpening his sword for another long journey. Get ready to see Link in colorful 3D action; flying the friendly skies on a rare red bird, blowing things up, and tackling surprise obstacles and enemies deep in the forests and dungeons. You will become Link as you wield your remote in a sword-like fashion throughout the game, enhanced by using the Wii MotionPlus device.

With the bundle, you will procure the game disc, a 25th anniversary concert soundtrack (get out your Zelda Playable Ocarina and jam), and best of all, a regal Wii remote in shiny gold. The game is rated E 10+ so almost everyone can play.

You can pre-order the Legend of Zelda: Skyward Sword Bundle for Nintendo Wii at game retailers such as EB Games and Best Buy in North America for $69.99. You might want to cover up your goosebumps of excitement with this handmade Custom Pixelated Afghan that pays homage to Link.

When you want to play your your favorite SNES games using the Wii Virtual Console, you will want to use this Classic Super Famicom Controller For Wii to play them how they were meant to be played. And besides this is way more comfortable than […]