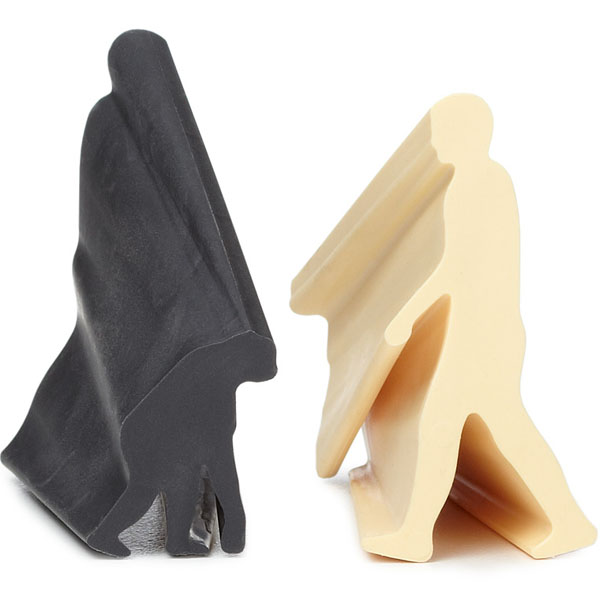 We’ve all been taught the theory of evolution in our Science classes when we were in elementary school. The fact that humans evolved from apes is one that is well-known and well-propagated, from t-shirt designs to toys like the Evolving Darwin Play Set to movie and story plots. But how about you begin erasing the mistakes that your ancestors might have made with the Evolution Erasers?

The Evolution Erasers look like they’re morphing from ape to man and back again right before your very eyes. I doubt I’ll ever get around to using these erasers though, because they are truly a beauty to behold. You might want to check out the Peanut Erasers or Mustache Erasers too, for some guilt-less yet still fancy erasing. 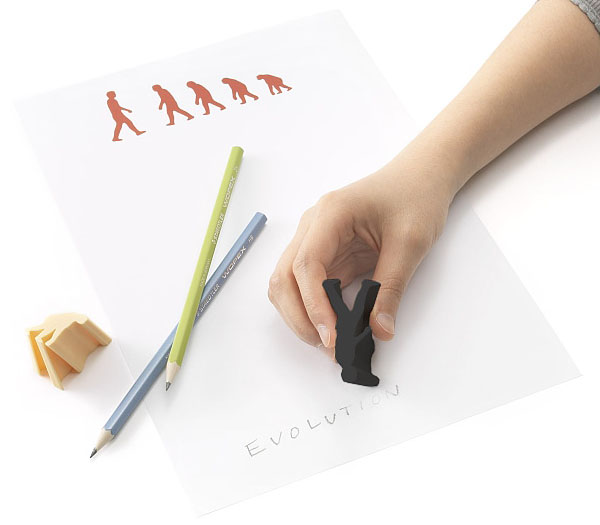 Don’t let written errors make a monkey out of you. Instead, let your writing evolve by using this Darwinian eraser. The unusually shaped eraser features a silhouette of modern Homo sapiens at one end, and its hypothesized simian ancestor at the other. Start by erasing from monkey end, and with each use you’ll witness another step in the gradually developing form. Or try it in reverse, as each typo moves you one step closer to un-evolved monkeyhood. The eraser can also be sliced into segments to expose the different developmental stages, or can even be used as creative, evolutionary ink stamps.

The Evolution Erasers is available from Uncommon Goods for $16.

Erasers don’t get any quirkier than this. If the Mustache Eraser Set failed to tickle your fancy, then maybe these Peanut Erasers will.

Are you a fan of everything cute and adorable? Do you collect erasers and can’t wait to get your hands on the next cool design after purchasing the Mustache Eraser Set? Then wait no further, because the IWako Mini Collectible Erasers are here! At first […]

At GeekAlerts.com, we love clever designs. That’s true whether it is something complex or somthing simple, even something as basic as a pencil eraser. These Metaphys Viss Spiral Erasers may not be high tech or complex, but their innovative design doesn’t just look cool, it […]

Have you ever written something down and just wished that you could delete it because it sounded weird, stupid, or just plain wrong? You won’t be able to do it quite as easily if you used a pen to do so, but if you used […]

The erasers in the Mustache Eraser Set won’t be able to erase that fuzz growing on your upper lip, but it can erase lines and drawings and marks that aren’t meant to be there on paper, provided you used a pencil, of course.

Whether you call them Space Invaders, Space Intruders or just plain aliens, the fact is they want to take over our planet and eat our brains. Or something. When they finally arrive, we won’t stand a chance, so the way I see it is, if […]

Cats in the Box Eraser and Pencil 4pc Set

This Cats in the Box Eraser and Pencil 4pc Set is perhaps the cutest thing that your desk has ever seen. You get four frisky feline erasers hiding in cardboard boxes and the pencils they are attached to. They must be number mew pencils. This […]

If only all mistakes could be easily erased.  Well, the Rubber Jonny Pencil Eraser can make easy work of the ones you wrote in pencil anyway!  This novelty eraser makes a great spoof gift and a fun way to freak-out your nosy office coworkers.  3 […]

The Evolution of Batman Films Poster Print provides a cartoon-style look at how the Dark Knight has changed throughout the years during his adventures on the big screen. Created by artist Jeff Victor and measuring 18-inches by 24-inches, this limited edition poster follows the evolution […]