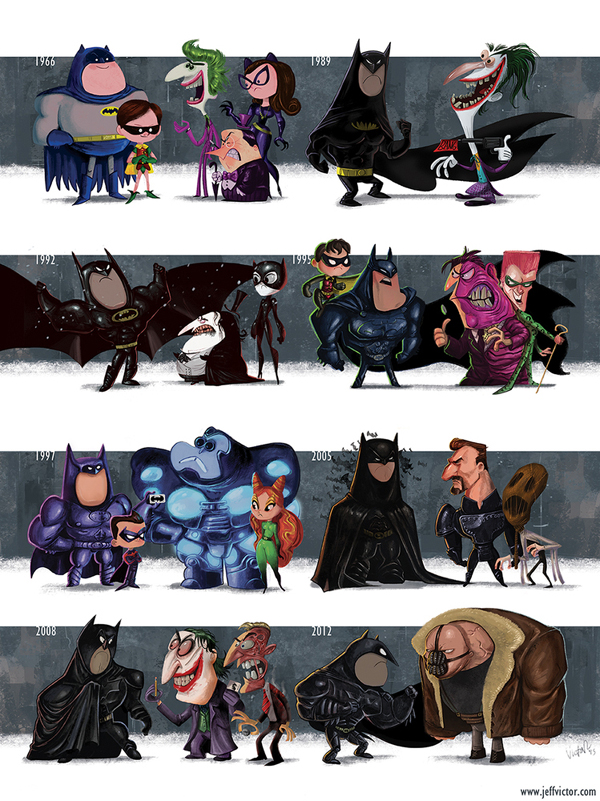 The Evolution of Batman Films Poster Print provides a cartoon-style look at how the Dark Knight has changed throughout the years during his adventures on the big screen.

Created by artist Jeff Victor and measuring 18-inches by 24-inches, this limited edition poster follows the evolution of Batman and the villains he battled in each film, starting with the cheesy 1966 Batman: The Movie and ending with Christopher Nolan’s The Dark Knight Rises in 2012. Since Batman tends to battle the same villains over and over, the poster also provides a few different versions of the Joker, the Penguin, Two-Face, and Catwoman.

The Evolution of Batman Films Poster Print is available for $35 at Jeff Victor’s Big Cartel store.

We’ve all been taught the theory of evolution in our Science classes when we were in elementary school. The fact that humans evolved from apes is one that is well-known and well-propagated, from t-shirt designs to toys like the Evolving Darwin Play Set to movie […]

This Pikachu Evolution Short Sleeve Button-Up Shirt is perfect. We all know that Pikachu is the best Pokemon anyway. Now he is on a shirt that is stylish and awesome. This black rayon shirt has yellow Pichus, Pikachus, and Raichus. You wear this and everyone […]