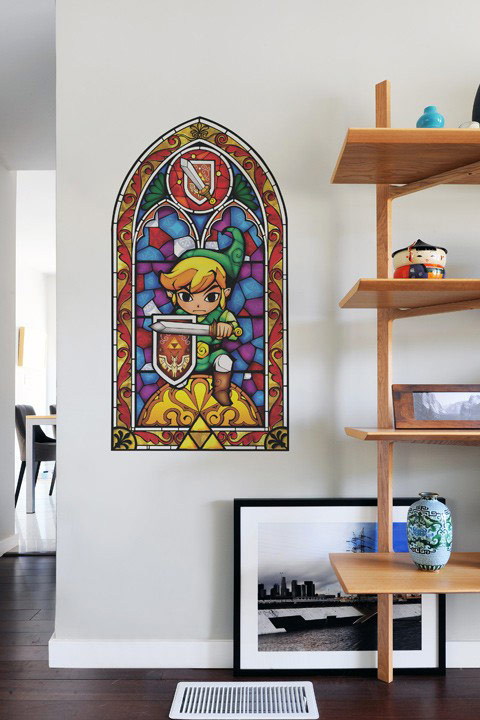 Do you remember the awesome 8 Foot-Long Zelda-Inspired Vinyl Poster Map? Well, The Legend of Zelda Stained Glass Wall Decals are another cool Legend of Zelda item that is sure to have Nintendo fans and Zelda fans excited.

There are eight different wall decals based on artwork from The Legend of Zelda: The Wind Waker HD for the Nintendo Wii U. Each is easily removable, officially licensed by Nintendo and perfect for your bedroom, game room, or even your office.

“We’re very excited to launch these new The Legend of Zelda graphics. You don’t have to be a Zelda fan,” says Blik co-founder, Scott Flora. “The products transcend video games. Zelda fans, gamers of all types and art lovers will appreciate the artwork in these stained glass decals. Like traditional stained glass, these colorful decals tell stories from The Wind Waker with six of the eight featuring the hero Link in various action poses using items he acquires in the game — Boomerang, Sword, Wind Waker – Gold, Wind Waker – Silver, Grappling Hook, and Hero’s Bow. The Helmaroc King stained glass decal tells the epic battle between Link and the evil bird while the Princess features Link with the Master Sword after he has defeated Ganon and saved Princess Zelda. 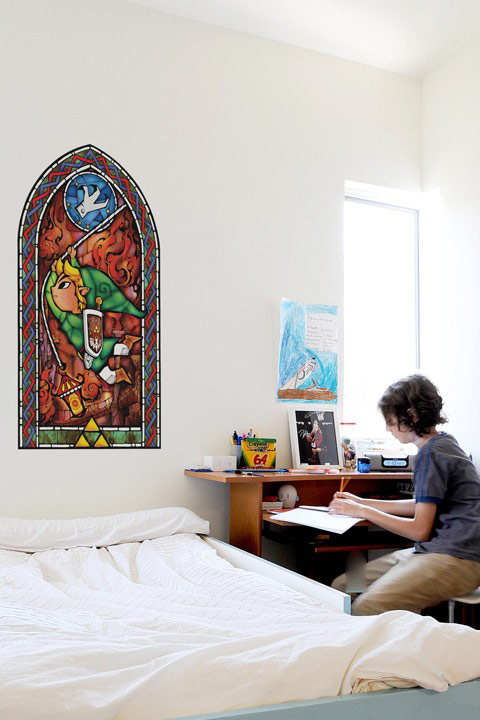 This The Legend of Zelda: Wind Waker 550pc Puzzle features a stained glass design of Link and Zelda that fans are going to love. Luckily for you, it does not require finding an item in a temple to complete. It makes a great gift for […]

Summer is coming, so it is time to look at some cool outdoor toys like this Switchblade Boomerang. This boomerang can be folded up to fit into your pocket, with the blades quickly popping out when you hit the spring-loaded button. Although you can imagine […]

This Zelda Stained Glass Link Bi-Fold Wallet is perfect for old school Nintendo fans. It has a stained glass look and features Link ready to do battle. It is made of polyester/polyurethane. Carry it with you to complete your epic quest to collect the Triforce. […]

Decorate your home of office with these Roommates Star Wars Classic Wall Decals. These peel and stick wall decals are perfect for places like offices and dorm rooms, because these stickers are easy to remove and reuse. Although this set comes with 31 Star Wars […]

Do Not Enter – Personalizable Wall Decals

Are you working on a top secret project? Do you have annoying siblings that always try to enter your room? Or are you just getting ready for the coming Apocalypse and you don’t want to be bothered by people, pets or the coming zombies? If […]