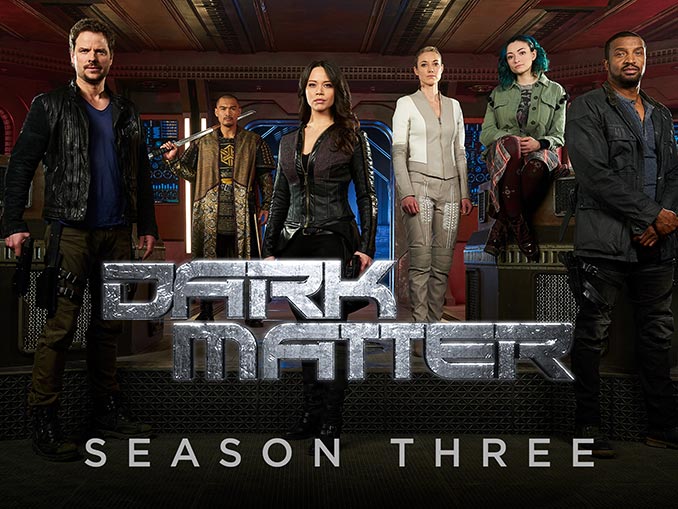 Today, Dark Matter: Season 3 was released on Blu-ray and DVD. This futuristic science fiction show from SyFy is quite popular with great reviews from critics and audiences. If you’re a diehard fan, you probably want this. If you’ve never seen the show before, it’s worth checking out.

For a start, you can watch the Dark Matter Season 3 Trailer from SyFy:

If you’ve never seen the series at all, you might want to start at the beginning and watch the Dark Matter Official Trailer from SyFy:

See how things progressed in the Dark Matter Season 2 Trailer from SyFy:

In Dark Matter, the crew of a derelict spaceship is awakened from stasis with no memories of who they are or how they got on board. Facing threats at every turn, they have to work together to survive a voyage charged with vengeance, betrayal and hidden secrets. Dark Matter is based on the graphic novel Dark Matter by Joseph Mallozzi and Paul Millie (of the Stargate franchise). Cast includes: Zoie Palmer (Lost Girl), Roger Cross (The Strain), Marc Bendavid (Bitten), Anthony Lemke (White House Down), Melissa O’Neil (Les Miserables), Joelle Ferland (Twilight), Alex Mallari, Jr (Robocop).

Caught up in the explosion of EOS-7, the crew of the Raza is separated and desperate to take back the Blink Drive. To get back whats theirs, theyll have to destroy the man who was once their friendRyo Ishida, aka Four. Now emperor of his home planet, Ishida has his own plans for the Blink Drive. That is, until the crew uses his memories against him to find where he has it hidden. But diving into memories is finally taking its toll on Five. And when she learns a big secret about her past, will she leave the crew to seek the truth?

Dark Matter: Season 3 on Blu-ray has a list price of $49.98 (but is discounted everywhere) and is available at Best Buy, Target, Deep Discount, Amazon, and Walmart.

Dark Matter: Season 3 on DVD has a list price of $44.98 (but is discounted everywhere) and is available at Best Buy, Target, Deep Discount, Amazon, and Walmart.

If you are a fan of Stargate you are going to love the Stargate Coasters.  These are exact replicas of the Stargate used on Stargate SG-1 with all the fine details included, except of course the opening wormhole…Oh well, these still make a great coaster […]