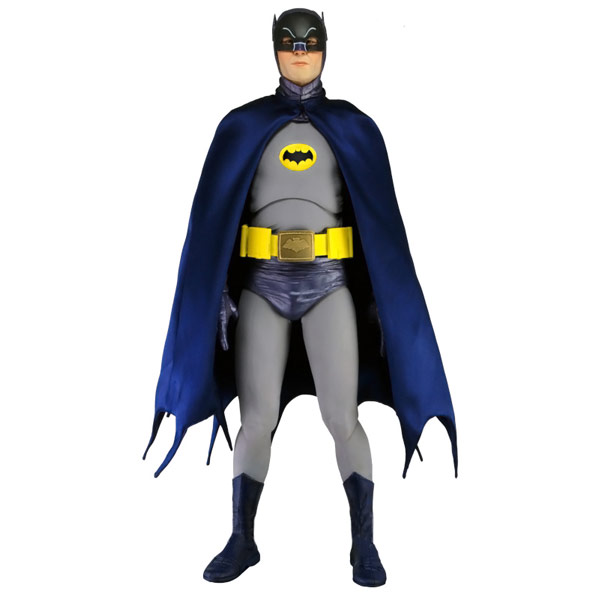 Pow! Bif! Kapow! The Batman of today is a seriously intimidating character but a lot of us geeks got our intro to Gotham City with a cheesy version of the Dark Knight, and the Batman TV Series Adam West 1:4 Scale Action Figure lets you fondly recall the bat-awesomeness of the 60’s.

Was it the drawn-on eyebrows on the mask? The… slow… halting…speech of Adam West? The hysterical spin on Batman’s iconic Rogue’s Gallery? Whatever it was, the batty take on one of DC Comics’ darkest heroes stayed on the air for two years so they must’ve been doing something right.

There are a lot of Batman action figures out there, like the Batman Arkham Asylum Play Arts Kai Action Figure and the Batman Dark Knight Rises Movie Masters Batman Figure, but this one really stands out because – well, come on, now – because it’s Adam West. What more is needed?

Okay, if an 18-inch-tall likeness of West isn’t enough for you, how about more than 20 points of articulation, a functioning utility belt, and interchangeable hands? Also, can any Batman collection truly be complete without this version of the Gotham City vigilante?

The Batman TV Series Adam West 1:4 Scale Action Figure will be available August 2013 but it can be pre-ordered now for $84.99 at Entertainment Earth.

If you’re looking for a Batman figure that pulls out all the stops, the Enterbay Dark Knight Batman HD 1:4 Scale Action Figure packs all the Bat-details you could possibly want. Not only does this 18-inch-tall action figure include over 30 points of articulation but […]