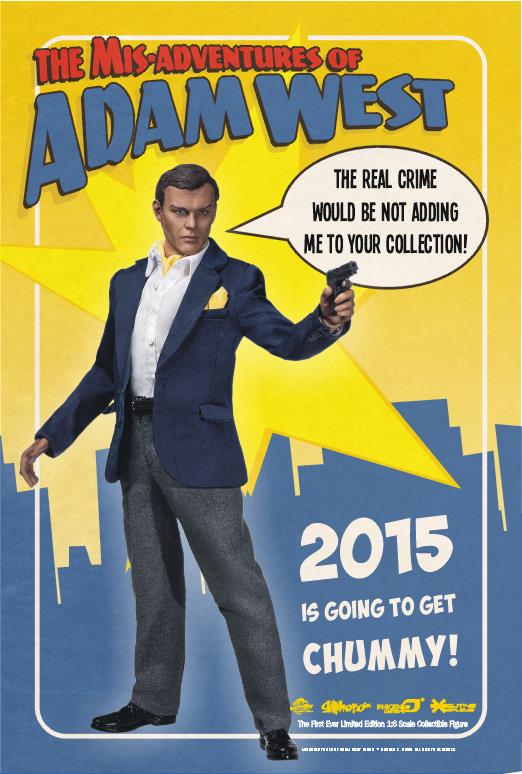 He’ll always be Batman to his legion of loyal fans but the Adam West Action Figure lets you take adventure beyond the cape and cowl.

Based on the Mis-Adventures of Adam West comic book series from Blue Water Productions, this action figure features an officially-licensed likeness of Adam West. In the comic book, West is given a magical amulet that sends him on various adventures through time, space, and alternate dimensions, with him ultimately being the man who saves the entire universe.

Of course, not even Adam West can save the universe without a stylish outfit and a few goodies to help him during his adventures.

The Adam West Action Figure will be available during the third quarter of 2015 but it can be pre-ordered now for $174.99 at Go Hero.

We’ve shown you a Deluxe Tuxedo T-Shirt with Gold Tie and even a full-body Red Tuxedo Morphsuit, but the Gangnam Style Costume T-Shirt is taking t-shirt tuxes to a whole nother level of swag. Wearing this shirt, you’ll feel as comfortable in your own skin as […]

If you have nothing to wear to the ball and refuse to be caught in a traditional penguin suit, why not slip on the no-hassle Red Tuxedo Morphsuit? I was recently lucky enough to go to a dressy party, and observed that the men who attracted the […]

Who needs those fancy formal occasions that require you to wear a fancy suit or tuxedo? Don’t they know that those clothes are uncomfortable and expensive? And who has time to shop for them? The heck with that. Just get yourself this Deluxe Tuxedo T-Shirt […]

Celebrate the beginning – and the end – of an era with the Batgirl Adam Hughes T-Shirt, revealing the person who will always be the one true Batgirl in the eyes of many comic book fans. Once upon a time ago (in 1988), a comic […]

The Garbage Pail Kids cards were always funny with their clever names and funny illustrations to match. If you are a fan, check out this Garbage Pail Kids Adam Bomb 9-Inch Vinyl Figure. He’s the bomb. No really. This collectible figure depicts one of the […]

Looking good is no laughing matter when you wear the DC Comics The Joker Woven Tuxedo Button-Up Shirt, and the Clown Prince of Crime has never looked sharper. When you’re ready to paint the town red with your pal, Harley Quinn, leave the purple suit […]

Face front, true believers, because the Stan Lee Action Figure has arrived, and it’s awesome. ‘Nuff said. Okay, maybe a little more needs to be said. Go Hero (the same people who brought us the Adam West Action Figure) has delivered unto comicbook fans a […]