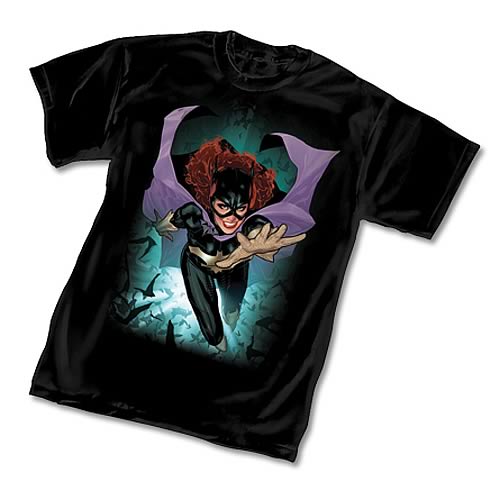 Celebrate the beginning – and the end – of an era with the Batgirl Adam Hughes T-Shirt, revealing the person who will always be the one true Batgirl in the eyes of many comic book fans.

Once upon a time ago (in 1988), a comic book titled “The Killing Joke” turned the DC Universe upside-down when Barbara Gordon was forced to hang up the cowl. She proved that being in a wheelchair didn’t stop a person from being a hero as she became Oracle, while other characters tried their hand at being Batgirl.

Flash forward to 2011, when Babs once again put on the cowl and cape. That moment was commemorated with artwork by comic book artist Adam Hughes on the cover of Batgirl #1, and you can now wear that same image on this black, 100% cotton tee. It’s the perfect time to update your wardrobe since Batgirl is in the process of updating hers for a new look.

The Batgirl Adam Hughes T-Shirt is available for $18.99 at Entertainment Earth.

This DC Designer Series Wonder Woman by Adam Hughes 12-Inch Statue deserves a prominent place in your collection. It depicts Princess Diana of Themyscira. AKA Wonder Woman, as envisioned by artist Adam Hughes. It is a 12-inch scale resin statue that includes a display base. […]

If you consider yourself a Jedi at the game of darts than this Star Wars Dartboard is for you. Use the force as you aim and shoot your darts. The artwork of Leia from Return of the Jedi is done by Adam Hughes. You get […]