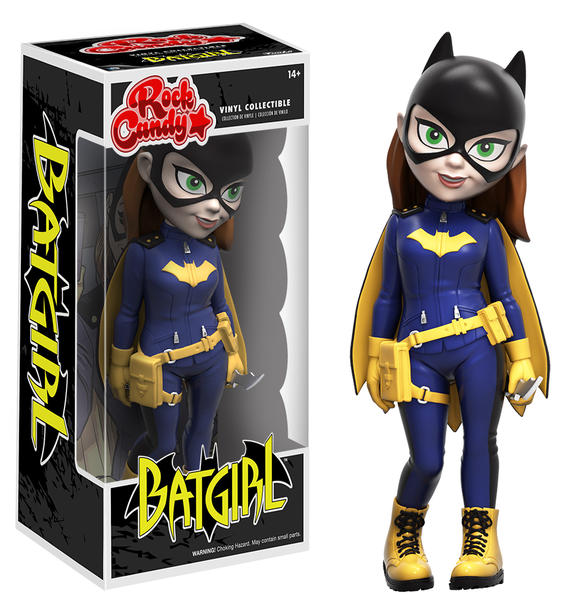 So, what’s a Batgirl to do when she leaves the familiar stomping grounds of Gotham City? Well, go shopping and get a new outfit, of course. Babs steps out of the spandex she was sporting with the Batgirl Classic Version Rock Candy Vinyl Figure and goes for a leather look that sort of connects with the Batgirl of the 60s TV show because of its purple hue. She must have also changed contacts because Classic Batgirl has blue eyes while Modern Batgirl has green eyes. The figure stands 5-inches tall.

The Batgirl Modern Version Rock Candy Vinyl Figure will be available June 2016 but it can be pre-ordered now for $10.99 at Entertainment Earth.

With so many different iPhone Cases out there, sometimes simple is better and that’s where this simplistic yet functional id America Hue iPhone Case will come in handy. Designed to fit the iPhone 4/4S and made with strengthened polycarbonate, this case has a two piece […]

Hop onto your Batcycle because it’s time to take a trip into the past with the Batgirl Classic Version Rock Candy Vinyl Figure. Before the purple Batgirl of Burnside outfit, before the Batgirl in black outfit, there was Commissioner Gordon’s daughter fighting crime in this […]

Batgirl of Burnside strikes a pose with the Batman Modern Batgirl Bobble Head. After going a bit dark for a while, Barbara Gordon returns to her classic purple and yellow color scheme while still giving her costume a hip and modern update. Standing approximately 6 […]

Pull on your star-spangled shorts, grab your lasso of truth, and rope in the Wonder Woman Classic Version Rock Candy Vinyl Figure. Maybe you’ve seen Funko’s Batman v Superman version of Wonder Woman, which is very nice, but maybe you prefer your Amazons with a […]

The Rock On Batgirl Art Print shows that even when Barbara Gordon has a rough night, she’s still ready to have a little fun. With Batgirl and the Birds of Prey appearing in DC Rebirth, it looks like Batgirl is regaining some of her serious […]