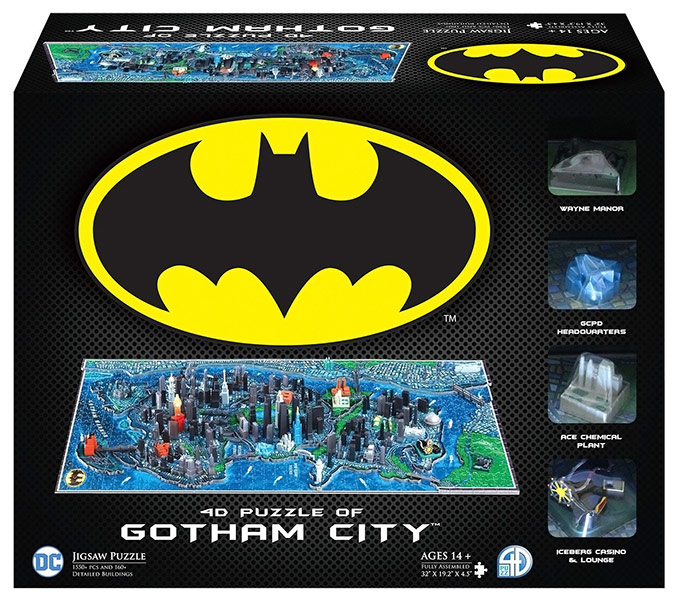 This Batman Gotham City 4D Cityscape Puzzle lets you build Gotham city. This puzzle will guide players through the assembly of the official DC map of Gotham City in a cool multi-layer design.

The first layer is a 1000+ piece jigsaw puzzle that will teach you all about the various locations and regions of Gotham City. The second layer is an artistic 200+ pieces jigsaw puzzle that replicates the night landscape based on DC Comics official map. The third layer you add 3D miniature replica models into the puzzle, which include famous buildings and structures like Wayne Manor, GCPD Gotham City Police Department, Ace Chemical Plant, Wayne Tower, Iceberg Casino & Lounge, and more! 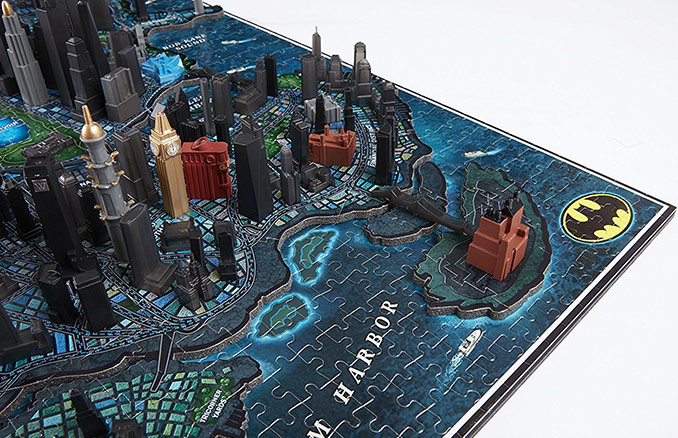 It also includes a mini LED Bat Light located at the top of the GCPD building. It shines the batman logo into the sky. How cool is this puzzle? Find it at Entertainment Earth, Amazon, and Walmart. Use Rout to track prices and availability.

If you enjoy watching Doctor Who and all of his adventures, then maybe you are ready for an adventure yourself. The Doctor Who Jigsaw Puzzle has 1,000 pieces and is sure to test your visual skills and logic as you try to place all the […]

Do you like puzzles? I mean really, really like puzzles? Well, I have the perfect puzzle for you… but only if you have plenty of time, lots of dedication, and room to spare because they don’t call this the World’s Largest Jigsaw Puzzle for nothing.

If you want to help Batman get crime off the streets, the best way is to become a member of the Gotham Police Department. However, it is tough to get accepted. So wear this Batman Gotham City Police Beanie and feel like you are doing […]

Lord of the Rings Map of Middle Earth 3D Puzzle

This Lord of the Rings Map of Middle Earth 3D Puzzle brings Tolkien’s world to life right before your eyes. You get to build it. It has over 1390 pieces and is even more rewarding than a typical puzzle. A must for all Lord of […]