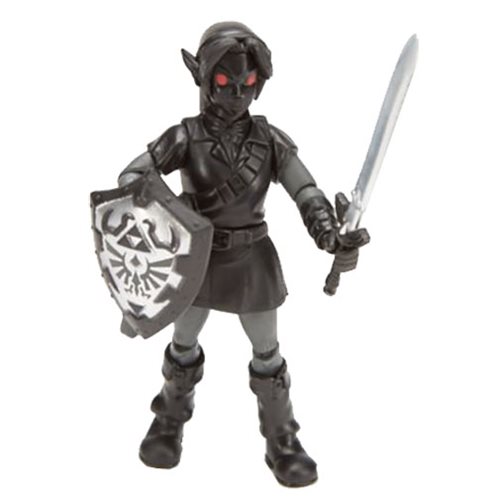 You have to love the detail on this awesome World of Nintendo Shadow Link 4-Inch Action Figure. Legend says that the evil remnants of Ganondorf remain locked within the Dark Mirror after his defeat during Twilight Princess. His wicked thoughts and general evilness form a twisted, dark version of Link known as Shadow Link.

Here he has his glowing eyes and he is equipped with the same abilities as Link making him difficult to defeat.

He stands 4 inches tall and is only $19.99 from Entertainment Earth. Pre-order him now and he ships in October.

Become one with the darkness with this cool-looking Shadow Hoodie. When Jack Frost once again starts nipping at your nose, you’ll be able to enter the world of shadows… which will actually make you incredibly visible when everything else is covered in snow. That’s okay, […]

Set these Shadow Coasters on your tabletop or counter and they will protect your surfaces while looking spooky for Halloween. You get a set of 6 coasters (2 each of 3 designs). They read “Happy Halloween” where you put your beverage. Scary stuff, but not […]

Stepping out of the shadows with his fiery red lightsaber ignited, the Dark Lord of the Sith looks menacing and impressive on the Star Wars Vader Shadow T-Shirt. The only thing that could make this shirt more intimidating is if there was a way to […]

This Star Wars Return of the Jedi Wood Shadow Box is going to look great on your wall. It’s a nice way to celebrate the movie that ended the original trilogy. There’s nothing like a shadow box to showcase the stars of Star Wars: Episode […]

Every time I see a Guy Fawkes mask I think of the graphic novel turned movie, V for Vendetta. In it, the man who dons the Fawkes mask is portrayed as some sort of underground hero. It was only recently that I learned that the […]