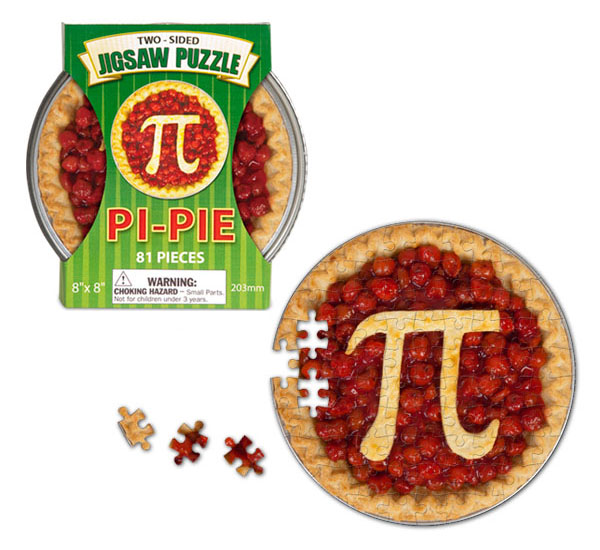 March 14th is just another day to many, but to math and science geeks it is one of the coolest days of the year and as Sheldon will attest, it happens to be Amy Farrah Fowler’s apartment number. If you are looking for fun and a cheap way to celebrate this magical number, this Two Sided Pi Pie Puzzle is perfect for puzzle fans and pi fans alike.

With 81 pieces and two sides, one depicting a cherry pie with pi symbol and the other resembling a pie tin with pi carried to 400 decimal places, math fans will have a tough decision to make on which side should face up. The Pi(e) Puzzle also comes complete it is own storage tin for safe keeping. 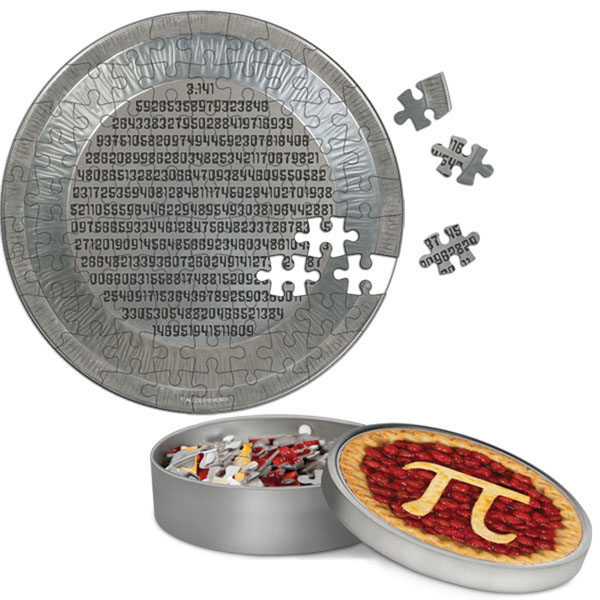 Jim likes pie. Jane likes pi. With this two-sided pi/pie jigsaw puzzle they can spend quality time together enjoying their respective pi(e)s. Isn’t that romantic? Each 81 piece puzzle has an image of a delicious cherry pie on one side and a pie tin on the other side featuring pi carried to 400 decimal places! 8″ round when assembled.

Right now it’s prime cherry-eating time in North America, when cherries are riper and sweeter than ever. You can even find Rainier cherries which are delicacies in the produce section. If you love cherries in a big way, it might pay to own the OXO Good […]

Want to be able to say you ate a whole pie by yourself and not have to worry about feeling guilty over making such a statement? The Personal Pie Factory proves that eating a whole pie doesn’t have to be an act of gluttony. I […]

This Harry Potter Quidditch Set 2-Sided Shaped Puzzle is shaped like the outline of a Quidditch trunk. It is also 2-sided so you can flip it over to assemble a different scene. It’s like getting 2 puzzles in one. It is 600 pieces and measures […]