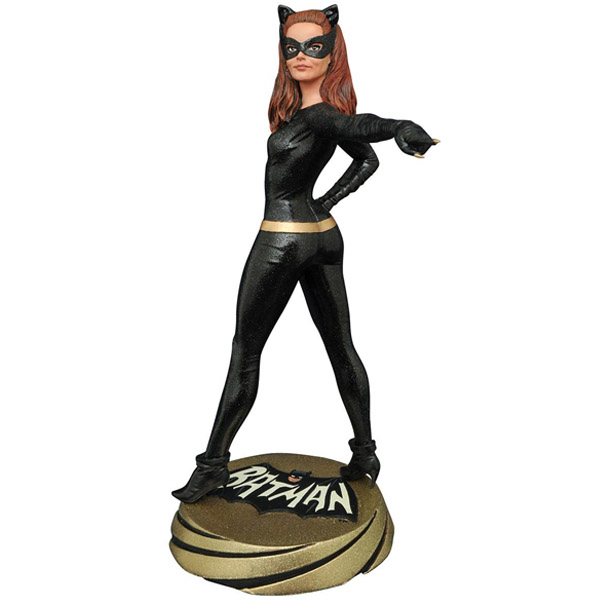 Standing approximately 12-inches tall and based on Julie Newmar’s portrayal of Catwoman, the frisky feline appears to be issuing a command, possibly ordering her underlings to place Batman and Robin in an elaborate trap that can be easily defeated after the cliffhanger ending.

Sculpted by Clayburn Moore, the statue comes packaged with a certificate of authenticity and is limited to just 1,966 pieces. It joins Batgirl as the second statue in the Premier Collection. 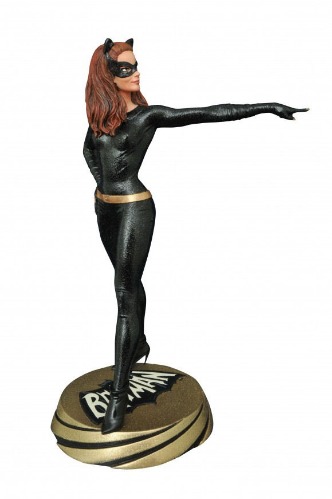 The Batman Classic 1966 TV Series Catwoman Premier Collection Statue will be available March 2016 but it can be pre-ordered now for $139.99 at Entertainment Earth.

Are you ready for some serious Bat-action? The Batman 1966 TV Series Premier Collection Statue is ready to bring on the POW!… and maybe even the KA-BLAM! Standing 12-inches tall and based on Adam West’s portrayal of the Caped Crusader in the classic 1966 television […]

The Feline Femme Fatale of Gotham City is ready to crack that whip with the Batman: The Animated Series Catwoman Premier Collection Statue. Standing 12-inches tall and limited to just 3000 pieces, this resin statue features Catwoman wearing her iconic gray and black costume from […]

Who has the proportionate strength of a spider and swings through the neighborhood on webs? The Spider-Gwen Premier Collection Statue should give you a clue. What? Did you think I was talking about that Parker kid? Sadly, the Peter Parker of Earth-65 suffered a drastically […]

Fans of devilishly sexy pin-ups and comic book artist Joseph Michael Linsner will want to get their hands on the titillating Little Minxies Sinful Suzi Statue, which brings one of Linsner’s artistic creations to curvy 3D life. In addition to working on comic books like […]