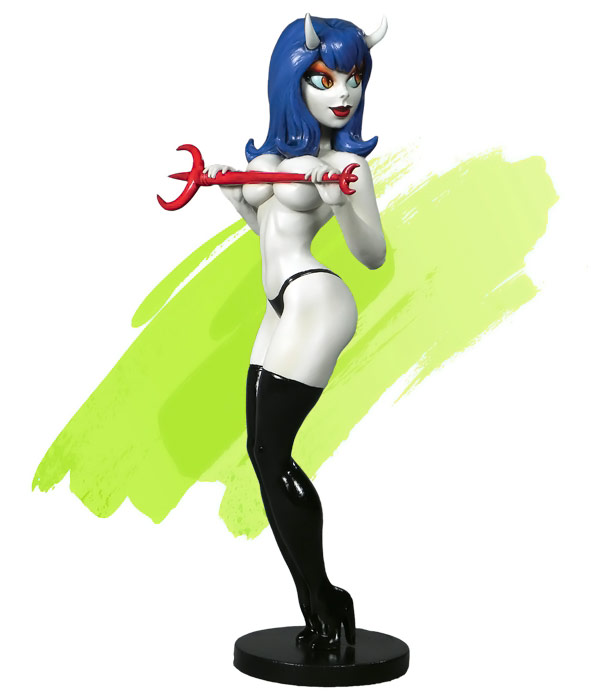 Fans of devilishly sexy pin-ups and comic book artist Joseph Michael Linsner will want to get their hands on the titillating Little Minxies Sinful Suzi Statue, which brings one of Linsner’s artistic creations to curvy 3D life.

The limited-edition, 8-inch-tall statue of Suzi, sculpted by Clayburn Moore and designed by Moore and Manuel Carrasco, is depicted exactly the way Linsner created her, with white skin, blue hair, and horns, wearing nothing but panties and thigh-high boots. A strategically-placed pitchfork does its best to protect what’s left of her modesty.

If you can’t keep your hands off those wicked curves, the Little Minxies Sinful Suzi Statue will be available November 2013, but it can be pre-ordered now for $44.99 at Entertainment Earth. Suzie will also be available October 2013 at the CS Moore Studio but can be pre-ordered for $44.95, and the first 300 collectors who order Sinful Suzi directly from CS Moore will have their statue signed by Clayburn Moore.

You are what you eat and that goes double for the iZombie Olivia Moore with Brains Pop! Vinyl Figure. Olivia ‘Liv’ Moore has a secret. She’s a zombie. Believe it or not, the light hair and pale skin don’t give it away and she puts […]

Who has the proportionate strength of a spider and swings through the neighborhood on webs? The Spider-Gwen Premier Collection Statue should give you a clue. What? Did you think I was talking about that Parker kid? Sadly, the Peter Parker of Earth-65 suffered a drastically […]

Now you can relive your favorite moments from the hit show iZombie with this iZombie Liv Moore Action Figure. She is a doctor who became a zombie on the hit CW show iZombie. She solves crimes by eating the brains (and memories) of the victims. […]

Fans of the 1966 Batman series will love this Batman 1966 TV Series Batgirl Premier Collection Statue. This Batgirl will be the centerpiece of your statue collection. This full-size statue depicts actress Yvonne Craig as the unforgettable Batgirl, the way she appeared in the third […]

This Marvel Premier Collection Captain America Statue is sculpted by Clayburn Moore and depicts the superhero in an iconic pose inspired by Jim Steranko artwork. Yes, that explains why it looks so amazing. It is based on the cover of Captain America #111 and stands […]