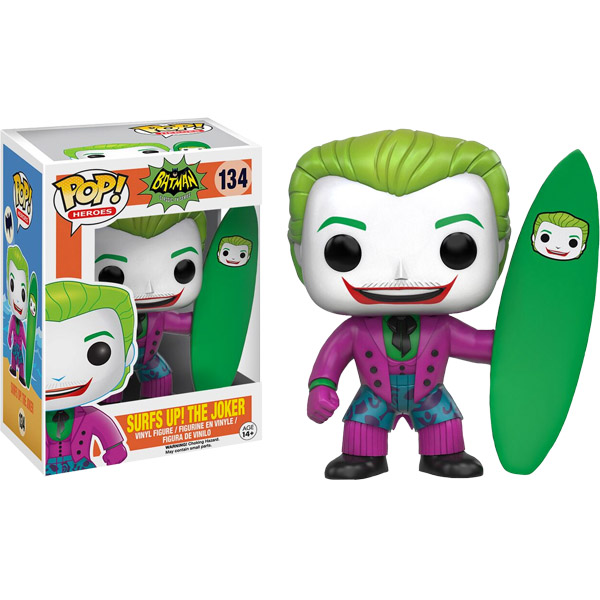 Holy Wipeout, Batman! The Batman Classic 1966 TV Series Surf’s Up Joker Pop! Vinyl Figure lets you relive one of the most interesting episodes from the classic 1966 Batman television series.

Quick! What’s the best way to take control of Gotham City? If you didn’t say by becoming a surfing champ then you’re nowhere near being as brilliant as the Joker. This 3 3/4-inch tall Funko figure features the Joker wearing his iconic purple suit, along with swim trunks. Don’t question it because it’s for the best. Do you really want to see the Joker’s pasty white legs?

Set up your own surfing competition by bringing in the Batman Classic 1966 TV Series Surf’s Up Batman Pop! Vinyl Figure.

The Batman Classic 1966 TV Series Surf’s Up Joker Pop! Vinyl Figure will be available September 2016 but it can be pre-ordered now for $9.99 at Entertainment Earth.

Even the protector of Gotham City needs a little time to kick-back and relax every now and then, and the 1966 TV Surfs Up Batman Action Figure gives us a very different look at the Caped Crusader as he leaves all the hi-tech toys behind […]

Usually, it’s not good to have someone laugh at you when you wear swim trunks but the Joker Hahaha Swim Trunks are the exception to that particular rule. Looking good is no joke but that doesn’t stop Gotham City’s Clown Prince of Crime from laughing […]